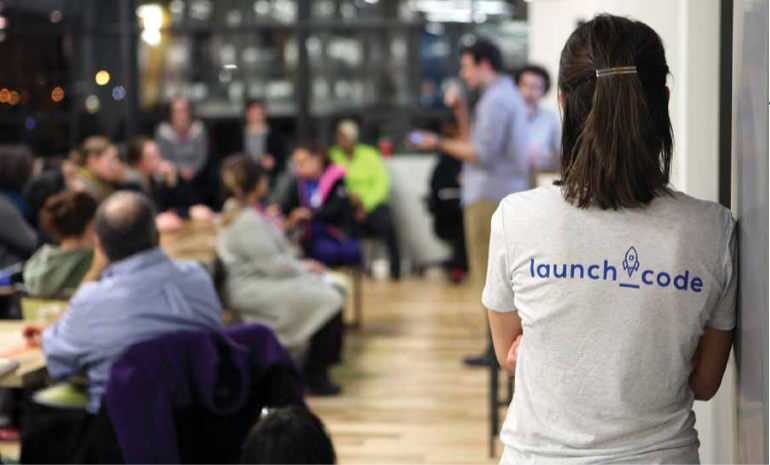 As a single mother, Kathy Heffern never imagined she could succeed as a computer programmer. She just knew she needed to jump back into the workforce and find a career that offered her more promise than her master’s degree in social work.

With free and easy access to a wealth of resources, Heffern decided to teach herself, saving on child care and avoiding more student loan debt. The hardest part was making enough time to study while caring for her two young daughters. She found it by reading during naptime and taking programming books to the playground.

Heffern grew more confident as she designed websites for friends. It was thrilling and rewarding work that fit well with her thought process and problem-solving skills. Still, despite her progress, full-time employment felt out of reach.

“I knew I was close to taking a next step, but I didn’t know how to bridge the gap from working at home to being employed in the field,” Heffern says.

It took a creative suggestion from her father, a longtime programmer at Boeing, to give her hope. He suggested she check out a nonprofit startup called LaunchCode, which had been gaining momentum in St. Louis. LaunchCode was known for pairing motivated and hardworking potential programmers with top-level employers such as Monsanto, MasterCard and Anheuser-Busch through apprenticeships and job placements.

LaunchCode connected Heffern to a 10-week training course and then a three-month apprenticeship, exactly the guidance and support she needed to secure a full-time job with Giant Hat, where she currently develops software for mobile apps.

“I am in a place where I can take care of myself and my kids,” says the 32-year-old. “I didn’t really anticipate that. LaunchCode has been really empowering.”

For many people like Heffern, the tech field looms large and mystical. They like the idea of trying something new or advancing out of a low-wage job, and they’re even willing to put in the effort to obtain the necessary skills. Unfortunately, they can’t break in by themselves. Most aren’t recognized because they lack experience or come from a nontraditional background.

Fortunately, Launch Code helps them imagine a daring new future, where even people in a city such as Columbia can find pathways into the opportunity-rich world of technology. 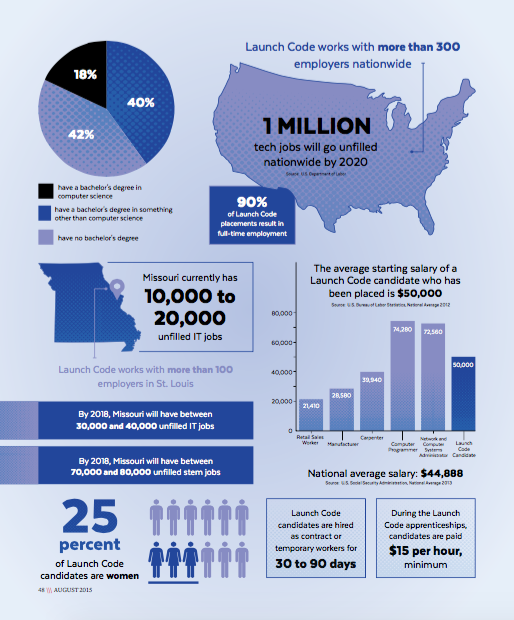 LaunchCode, conceived by Square co-founder Jim McKelvey, believes it’s no longer reasonable to overlook individuals from nontraditional backgrounds, especially when an estimated 1 million programming jobs are projected to go unfilled by 2020. To bridge the gap, LaunchCode is pioneering a personalized job-placement system aimed at connecting underemployed and unemployed candidates, including women and minorities, with three-month paid apprenticeships in programming and other tech-related work environments.

In 2014, 90 percent of LaunchCode’s apprentices were retained as full-time employees, and the number of new programming jobs generated in St. Louis totaled 140.

But the goal is not to remain a St. Louis phenomenon.

Even before getting a shout-out from President Barack Obama at the National League of Cities Conference in March, LaunchCode had been imagining ways to spread across the country. Expansion efforts started last fall in Miami and now include Kansas City and Columbia, the latest destinations where LaunchCode intends to refine its blueprint and be an engine of change in the tech field.

Brendan Lind, Launch Code president, made the trip to Jefferson City in January to discuss possibilities with a few representatives, including State Rep. Kip Kendrick, D-Columbia. Then to get some momentum behind the endeavor and gauge interest, Kendrick invited key business leaders to Columbia College for an informational session on May 4. More than 70 companies were represented.

This outpouring of support didn’t surprise Kari Eckelkamp, LaunchCode’s company engagement manager. Eckelkamp spent close to five years working in advisory roles at the University of Missouri and made a personal push for Columbia to be a part of LaunchCode’s expansion across the Interstate 70 corridor to Kansas City.

“Our first priority is to make sure Missouri and mid-Missouri are on the map as a model,” Eckelkamp says. “We want the Show-Me State to show the way.”

Kendrick didn’t need the president’s endorsement, the successful numbers or the impressive stories to know he wanted to be a champion for LaunchCode in Columbia.

What convinced him to participate was a bit more personal.

For three years, Kendrick worked as an employment adviser with Job Point, where he encountered the real struggles people face finding jobs or breaking into more advanced positions. Later, while holding listening sessions with area businesses during his campaign, Kendrick heard a lot about the need for new lifeblood in the IT and programming community in Columbia.

“LaunchCode would be a game changer for the tech scene in Columbia,” Kendrick says. “Business will win, and job seekers will win.”

Businesses in Columbia share Kendrick’s enthusiasm. John Rooney, vice president of information services at Shelter Insurance, committed to partnering with LaunchCode after the presentation he heard at Columbia College. Currently, Shelter, which could staff anywhere from five to nine open tech positions, has to engage in far-reaching and drawn-out searches to fill open positions. LaunchCode, Rooney says, “brings the pipeline to us.”

“LaunchCode won’t fill all our positions or needs,” Rooney says, “but there are positions that lend themselves to this kind of arrangement, where someone with minimal experience can learn and move themselves up through the organization. I’m excited to see if this LaunchCode experiment will work for us.”

Steve Powell, president of Delta Systems Group, welcomes any initiative to nurture and keep tech talent in the area. He alone could use two or three more developers and mentioned Carfax and MidwayUSA as examples of other companies with similar needs.

“We can’t hire enough people that have the qualifications we need in town,” Powell says. “LaunchCode will be good at growing and building exactly what we need in people so that they can hit the ground running. That’s the boost everyone needs.”

Kirk Bowman has proven it isn’t just large employers that benefit from LaunchCode. When he wanted to build a development team for Zipline, the startup he founded to reinvent the way people move money, he considered two paths.

One approach, modeled by the New York Yankees, would require him to pay high dollar for the best available free agents. The other, known as “The Cardinal Way,” would focus on building a minor league system with teachable players who fit his company’s culture.

He picked the second path and looked to LaunchCode for help finding the right people. He hasn’t been disappointed. Since November, Zipline has hired four full-time developers out of LaunchCode.

“It’s the only place I would go back to if I wanted to expand our team,” says Bowman, who is required to pay a $5,000 placement fee to LaunchCode for each candidate he hires at the end of an apprenticeship.

Before meaningful matches like this happen, though, LaunchCode does some heavy lifting, reviewing applications and interviewing both candidates and businesses. “We’re like Match.com,” Eckelkamp says.

They understand people aren’t machines; everyone has unique experiences, personalities, aptitudes and goals. What matters most to LaunchCode is a candidate’s potential. If someone has a modest set of programming skills, along with an eagerness to learn more and think rigorously, LaunchCode moves forward. Those who lack programming fundamentals are redirected to LaunchCode’s educational partners, local and online, for free training, and they can reapply when improvements are made.

LaunchCode is equally as attentive to researching and understanding each employer. Gaining a clear picture of a company’s work culture, mission, vision and employee demographics helps provide good fits for both sides while also protecting the integrity of the program against shotgun placements.

For now, the mission in Columbia is about deepening the connection between a unique nonprofit and a hopeful city. Since the May event, LaunchCode has been building a robust network of relationships with businesses and educators to ensure the model will thrive. Its success also depends on a strong financial base.

LaunchCode needs to secure funding to make its services a reality. Its goal is to have $350,000 in commitments by September. This money will support staff, program development as well as candidate and company recruitment efforts, and the expectation is that LaunchCode’s efforts in Columbia will be self-sustaining within three years.

“We want businesses and investors to see how LaunchCode will benefit the entire community and build the technology ecosystem rather than just help one person,” Withycombe says.

So far the response has Withycombe confident about LaunchCode’s future in Columbia. “I’m really impressed by how readily people want to engage,” she says. “We perceive lot of excitement and enthusiasm, and that’s what motivates us.”

On June 19, the Missouri Technology Corp. awarded LaunchCode $250,000 for the Kansas City expansion efforts, and Withycombe expects Launch Code to be invited to apply for that same level of funding for Columbia in the fall.

Once LaunchCode achieves the financial goal, the education and community engagement teams kick into high gear. In particular, LaunchCode will be looking for a partner to host and provide instructional and curriculum support for edX and Harvard’s free online CS50x course.

As these pieces come together, Withycombe believes LaunchCode could start remotely pairing candidates with employers in early 2016, and a modest goal of 10 to 15 placements within eight to 10 companies has been set for the first year. In all, LaunchCode hopes to partner with between 30 and 50 employers in Columbia.

It’s this kind of potential that reinforces LaunchCode’s desire to be matched with Missouri for many years to come.

“Why not Missouri?” Withycombe says. “Something like LaunchCode could happen easily in Silicon Valley, but why not make a meaningful impact here?”