When Rebecca Dunn entered her first Miss Missouri USA pageant two years ago, she didn’t tell anyone outside of her immediate family. “It was so scary, and it’s one of those things where you have to put yourself out there with so much room for rejection,” Rebecca says. However, when she placed within the top five, she knew in that  moment she had to try again. This year, on her second try, Rebecca took home the crown. She saw Miss Missouri as a chance to not only catapult her career in the entertainment industry but also to promote social causes that  are close to her heart, including Mizzou for You, a mentorship program for young adults with special needs.

Rebecca founded Mizzou for You while she was still a student at the university. As she prepares for the road to  Miss USA in June, Rebecca jokes the reality still hasn’t set in. “I don’t think it will hit me until I’m on the stage at Miss USA,” she says. 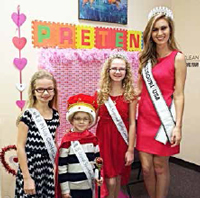 With a schedule full of work, training and practicing for interviews, Rebecca says it’s often her fellow competitors who inspire her the most. “We’re all very passionate and committed,” she says “One thing all the competitors have in common is drive.”

As Miss USA looms closer, Rebecca’s training regimen has gotten more intense. With only a couple months left until competition, she hits the gym daily for an hour of cardio and an hour of strength training.

Rebecca heads to Newsy, where she works as an anchor. When Rebecca realized how much she loved the entertainment business, she decided Miss USA would be a step in the right direction for advancing her career.

Rebecca leaves Newsy and heads straight to Fox 22, where she works a few shifts a week.

Every day Rebecca tries to remember to take some time to go outside and enjoy the day. “I get so caught up in everything I have to do,” she says. “Sometimes I need to remember that there’s more to life than Miss USA.” 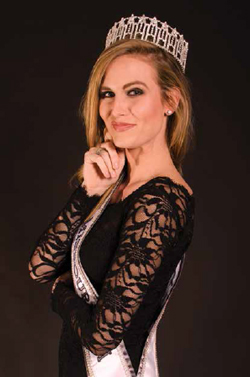 Because the interview portion is such an important part of the Miss USA pageant, Rebecca spends part of each day brushing up on current events. Using daily news updates such as theSkimm, Rebecca prepares a page summary of the day’s events and her views on them to send to her pageant director each night.

“One of the biggest differences since I became Miss Missouri is people asking me to be places and make  appearances, which I love,” Rebecca says. Whether it’s attending a charity event, meeting with fellow competitors or picking out gowns for the pageant, Rebecca says there’s a lot more that goes into preparing for Miss USA than she ever imagined. Prepping for the crown is a full-time job for Miss Missouri Rebecca Dunn.