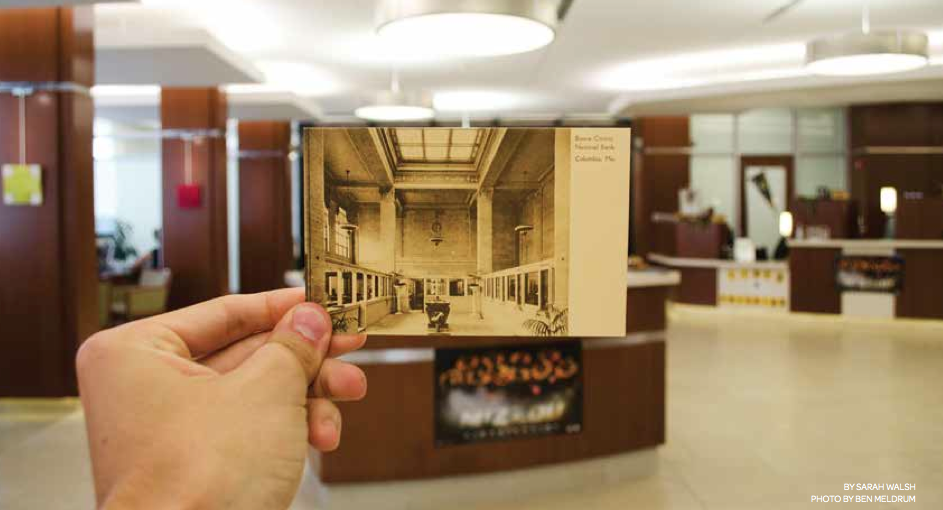 Father-and-son-in-law duo Moss Prewitt and R.B. Price established Boone County National Bank in 1857. Then, it was known as Prewitt and Price; later, in 1863, it became the First National Bank of Columbia. The business took on its current name in 1871 upon the post-Civil War reinstatement of its national charter. Today, Boone County National Bank maintains 25 locations throughout Columbia. The largest and oldest of these, a building with the columns and gray stone face of a courthouse, stands downtown at 720 E. Broadway.

This address housed the Selby Hotel throughout the 1800s but became Boone County National Bank’s headquarters at the beginning of the 20th century. Construction on the earliest incarnation of the modern building ended in 1917.

This central location received a renovation in 1955 that spanned three years; construction crews added two sidewalk tellers and a second level to the building. After the completion of this project, the Missouri General Assembly passed legislation that allowed banks in the state to open additional facilities within 1,000 feet of their main buildings. Boone County National Bank opened its second location, The Motor Bank, in 1965.

The main location has seen half a dozen additional renovations in the years between 1965 and the present, most of them aimed at expanding the facility to accommodate a growing population with increasingly technological needs. In 1977, Boone County National Bank became the home of Columbia’s first ATM. Third and fourth floors were added in 1986 and 1992, respectively.

One nontechnical addition worth noting is People, an abstract fiberglass sculpture crafted and installed in 1971 by then-MU professor Don Bartlett. People sits in the reflecting pool outside of BCNB’s lower-level offices; its presence and its familiarity as a symbol of downtown Columbia remind staff that customers and community are the bank’s foremost priorities, according to Mary Wilkerson, senior vice president of marketing.

Boone County National Bank received its most recent remodel — a complete first-floor makeover of the building’s interior — in 2012. Wilkerson says there are no additional renovations planned for the immediate future, but the bank will continue to update itself to serve the needs of Columbia citizens.

Small Business of the Year finalist: Manor Roofing and Restoration