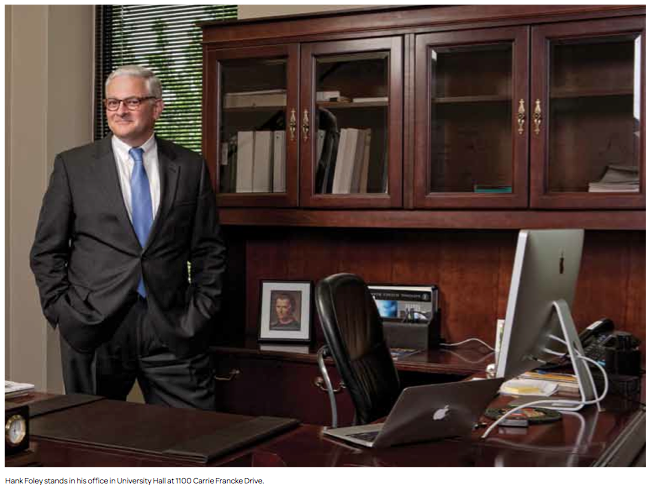 When Beyond Meat opened its doors in Columbia, it was a shining example of business partnering with academic research. Thanks to a united effort involving the University of Missouri, business and community leaders, the company moved its plant here from Maryland and brought with it jobs and an enterprising spirit.

Several months later, Hank Foley, senior vice chancellor for research and graduate studies at MU, arrived with a plan to ride that spirit. Responding to a hypercompetitive market for federal research dollars, he developed a five-point strategy to increase academic research and bring more of it to the marketplace.

Foley moved to Columbia in August 2013 as UM executive vice president for academic affairs, research and economic development. Last March, he also took on his position at MU.

“The two roles are complementary,” he says. “Like two gears, they mesh together very nicely.” He is, after all, an engineer. With a master’s degree in chemistry from Purdue University and a doctorate in physical and inorganic chemistry from Penn State University, he has spent the whole of his academic career in chemical engineering.

Foley says that though the system doesn’t do research or teaching, the individual campuses do. “So as a leader, it actually helps me to have one foot in the campus, our largest campus in fact, where I’m not only talking about what we should do, but I’m trying to lead by doing.”

This practical approach is at the heart of Foley’s strategic plan. He says he crafted the plan before he arrived, after studying the university and what needed to be done. Since then, he has discussed it widely, sharing his vision of making the UM System a place that grows its own entrepreneurial communities.

The first of the plan’s five points is collaboration across campuses. The initiative encourages all four members of the system to share best practices and is designed to keep competition outside the system rather than within.

The plan’s second point involves fostering entrepreneurship. A program slated to begin in January 2015 will help students take courses in entrepreneurship over and above their regular course loads, and the system will pay for the coursework.

“We’re going to select 12 students from around the system every year to do that and also provide them with an entrepreneurial internship,” he says. “We hope every year that a few of them may choose to stay in Missouri and start businesses and become serial entrepreneurs. If we could do that year after year, we could build a very strong entrepreneurial community here in Missouri near the four campuses.”

The third point is to revise the university’s policy on intellectual property, or IP. In a letter to faculty last May, Foley announced he was relaxing the common practice of guarding ownership of IP in industry-funded research. Allowing companies to have a stake in what they’re funding can pave the way for smoother negotiations and better partnerships that can provide even more funding and collaboration. He added that in many instances, faculty prefer to have “funding in hand” rather than lose it to failed negotiations over IP.

In his fourth point, Foley seeks to reward researchers for cultivating their products in the marketplace. A number of programs have already started and are in good shape, he says. One, Tech Expo, brings in venture capitalists to look at newly developed technology. Another, which is currently called “Fast Track 1,2,3,” recently completed its first round.

“This will perpetuate itself over time, and that’s one of the ways we hope to select new technologies from around the system that can be accelerated toward the marketplace,” he says. “Pending money, that will continue.”

The final point in the plan involves borrowing good ideas from other universities. Foley says he’s impressed with what’s happening at a number of schools. Purdue University’s efforts to accelerate the conversion of science and technology into new businesses are an example.

“A lot of the things that Hank has articulated in his five-point plan are areas where we are striving to move forward,” says Steve Wyatt, vice provost for economic development at MU. “So it’s very positive. We’re very happy about the expertise he’s brought with him to share with us.”

Wyatt, who represents MU on the board of Regional Economic Development Inc., works with Foley to attract companies to the area, help faculty with startups and facilitate licensing. He’s also involved in making sure students are prepared to meet the requirements of potential employers.

“The university is the engine that needs business and the community to move its research forward,” Wyatt says. Each knows what the other brings to the table, and like a team, they complement each other very well.

“Everybody’s beginning to move more to what I’d describe as an ROI mentality,” Wyatt continues. “What we’re doing is we’re making some changes. If a private company wants to contract with the university for research, the university can allow them to own that IP. That makes it a lot more conducive for companies to want to do business with the university.”

In his previous position at Penn State University, Foley had been at the forefront of adjusting IP practices, with the University of Minnesota making the change almost simultaneously. Since then, many other schools have gotten on board.

“There’s no laxity of care in what we’re doing with this new approach,” he says. “What we should be able to see is considerably easier negotiations with industry that wants to work with us and probably much happier faculty who want to do that kind of work.”

Foley says that the key is research independence. Strong academic values prevent potential abuses such as receiving corporate funds to prove a product’s superiority. There are plenty of good companies that support fundamental research for the sake of science, he says. And that’s the kind of funding the new practice is designed to attract.

“I support Foley’s vision,” writes Susan Nagel, a researcher and associate professor of obstetrics, gynecology and women’s health at MU, in an email. “Under his leadership we will strengthen areas that have been lagging at MU while other universities have been surging ahead.” She adds that research to generate basic knowledge is almost always the groundwork that gets translated into innovation.

An important factor driving Foley’s vision is the university’s status in the Association of American Universities. Currently, MU is ranked 32 out of the 34 public universities that are members. Foley’s goal is to move that ranking to 28 by 2018.

AAU membership carries a lot of clout in helping institutions receive federal research funding. Members have access to private meetings with leaders in government and business, and the AAU imprimatur can influence lawmakers, donors and other vital interests.

Membership to the private organization is competitive and by invitation only, and each school is ranked according to certain metrics. The most important is funding for competitive research. Others include faculty memberships in national academies, awards and fellowships and citations in important publications.

“The strength of the university is first measured by its ability to go out and compete nationally for federal research dollars, whether it’s in medicine, science or engineering,” Foley says. “That’s No. 1 out of four.”

Once attained, an AAU membership isn’t guaranteed. In 2011, the AAU voted to expel the University of Nebraska at Lincoln after it had been a member for 102 years. The move was unprecedented and sent shockwaves through academia, especially AAU schools with low rankings.

“The good news is that if the AAU problem were taken off the table, I wouldn’t change my strategic plan,” Foley says. “What I’m trying to do is increase the total dollar flow from the federal research agencies into Missouri. That’s good for the universities, but it’s also good for Missouri because that creates jobs immediately.”