House of Chow under new ownership 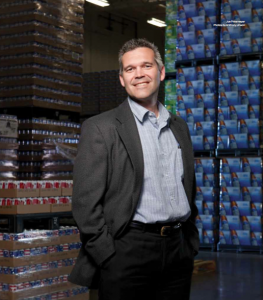 Joe Priesmeyer, president of N.H. Scheppers Distributing Co., speaks with pride about his grandfather Norb Scheppers. “He saw an opportunity and just started pedaling beer,” he says. “It was basically him and a truck for a long time.” Today, with more than 70 employees, warehouses in both Columbia and Jefferson City and a growing list of suppliers and products, this local company with humble beginnings has come a long way. Yet, the business’s commitment to quality service, established more than 60 years ago, remains the same.

Although founded in 1950, the company partnered with its first big supplier, Anheuser-Busch, in 1952. For the next several decades, Scheppers only sold Anheuser-Busch Products. In fact, it wasn’t until 2008 that the business expanded its supplier base, first to include nonalcoholic products such as Monster, Dad’s Root Beer and Fitz’s Root Beer. Dramatic changes in the beer industry prompted the company to expand its list of beer suppliers the following year. “There were less than 100 breweries in the country in the early 1990s,” says Priesmeyer, who took over the presidency from his uncle Joe Scheppers in 2008. “Today, there are about 3,000. We now have about 40 different suppliers.”

General Manager Mike Radzin says the majority of the company’s growth has been in direct response to customer demand for more microbrewery, or craft beers, those that are produced in smaller quantities and often have a distinctive flavor. “We’ve expanded from two local craft producers, Rock Bridge Brewery and Bur Oak Brewing Co., to bringing in two of the five largest craft breweries nationally into our house,” Radzin says, referring to New Belgium Brewing Co. and Deschutes Brewery. Scheppers distributes at least a dozen different brands brewed in Missouri in addition to products from across the country, from Lake Wood, New York, to San Diego.

Paul Wissmann, who manages the company’s craft portfolio, says there’s been a shift in customer preference in recent years away from the larger more standard beer companies, especially with the younger crowd. “There used to more brand loyalty in the industry,” he says. “But the 21-year-olds today are not making brand loyalty choices.” Instead, he says they are looking for something different that sets them apart and gets them noticed. “It’s like knowing the band before they became popular.”

Priesmeyer agrees, but he says consumers in general want more local products and services. “This is not just a Columbia phenomenon,” he says. “You are seeing industries starting to reflect that, and I think the beer industry is a bit ahead of the curve on this. This is one of the reasons why we try to partner with as many Missouri-made beers as possible.”

However, Radzin is quick to point out that Scheppers doesn’t represent every brand that approaches the company. “You have to select products you truly believe in, that the market will support and that people you want to do business with will like,” he says. Choosing the right partners is also important because each supplier brings with it several new brands, which increases the complexity of the distribution operations. For this reason, developing solid working relationships is the key.

“The core of what we do is that we are a logistics business,” Priesmeyer says. “The industry is changing; the consumer taste profile is changing, rapidly. We have to be cognizant of that and pay attention.”

Although Anheuser-Busch was purchased by InBev in 2008, the beer giant remains Scheppers’ biggest supplier. “Our relationship is still incredibly solid,” Radzin says.

According to Priesmeyer, their business relationship with the new company has not changed, though the company’s more corporate approach to business took some getting used to. “The previous owners of Anheuser-Busch thought more like a family-owned business, and they took a longer-term view of their industry and the position that they held in it,” he says.

Wissmann says he believes the beer industry will continue to evolve now that people have gotten a taste for different styles of beer. “Some stats indicate a new brewery opens every day across the country,” he says, which is why building relationships with suppliers is key. “So when they come into the area, we have an opportunity to establish a partnership. People in this area are seeking different brands and different opportunities, so my suppliers benefit immensely.”

For Radzin, new suppliers and innovative products make this an exciting time to be working in this industry. But overall, he says he appreciates working for a family-owned company that recognizes the value of its employees and is committed to the community.

“There is a charitable aspect here,” he says. “It’s not just about selling as many cases as we can. The mindset of this company is committed to their employees as well as the community.” Scheppers frequently donates thousands of dollars annually in products, cash and services. Recently the company constructed a large conference area off the back of its Columbia location called the “octagon room,” which is often utilized by local groups such as the Boy Scouts and the Boys and Girls Club.

Priesmeyer admits the distribution business is physically demanding and often challenging. Regulations between states can make it difficult to get products across the nation to mid-Missouri. “And then we have to figure out how to move it to our clients here in the area,” he says. Because beer is perishable, making sure stores receive enough inventory so they don’t run out but not so much that there are date issues with the products can also be tricky. Then again, he says there are perks. “It’s also the beer business, so it’s a lot of fun.”

Today, Scheppers runs seven delivery routes apiece from its two warehouse locations and distributes products in Boone, Cole, Callaway, Osage, Moniteau and Miller counties. “A lot of what this company is about stems from the fact that we are a family business and have been here for three generations,” Priesmeyer says. “This is our community; this is our home. It’s a large part of who we are, and we are connected to it.

He says he hopes as a company that they instill this same feeling in their employees. “I want our people to feel that when they come to work here, they are part of a family within the company and the community at large.”