As someone who got lucky and found a truly amazing man and a second chance at love with Jason Becking after I thought that would never be possible, I wanted to do something special for our second-year wedding anniversary. With the craziness of the last few years and our blended family (divorced mom with a son falls in love with widowed dad with a son and a daughter), I never had the chance to do something personal and special for him when we got married.

A friend of mine had a sister who is a local artist who specializes in legacy paintings.  After just moving into a new home, I realized that a legacy painting, which would serve as a constant reminder of our love and our new beginnings, would be perfect. I wanted something that we could see every day–a gift that would truly last a lifetime. 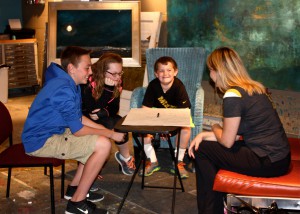 It seemed only logical to include the kids (Jack, Adelaide and Brandon) as a part of this “surprise” since when we married each other, it wasn’t just about us; it was about our new family. So, I called Jenny and we started the process of creating our painting.
First, we created our love notes. I had to find a time to sneak away with the kids to meet Jenny at her studio so she could interview us about our family. So, after a little fib to Jason on where we went, the process began. Jenny took notes about those things we love. The kids had fun and were pretty cooperative.

Jenny then went to work, creating two samples using our love notes as inspiration and incorporating the kids’ favorite colors. I met Jenny and chose my favorite. Then she worked to create the finished product.

Now the hard part – figuring out how to actually surprise Jason. So, the small lies continued. On our anniversary, we were doing our taxi cab service with the kids to various activities. Adelaide had informational night at the middle school where she would be going. Jason would take her and I would take the boys to music lessons. Adelaide was supposed to keep Jason there until at least 7 p.m. I was to meet Jenny and a local photographer who would capture the surprise at our house after music lessons and before Jason arrived back home. 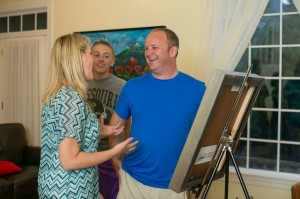 We met at the house. Got the painting set up and waited…and waited. The middle school informational night took longer than we thought.  About 7:30 rolled around and still no Jason. Then he texted. He was wanting to go get dog food and a few other items at the store. I’mg lad I have a husband who does his share, but come on! I lied again and told him I already got dog food earlier in the day trying to get him to come home. Finally, he arrived.

There we stood. He was confused and truly surprised. The kids and I unveiled our painting, our love notes and shared the process of the last month. Jenny was there to explain further. She had incorporated our saying, “I Love You, I Live You,” and also embedded the words: “You are my second chance, and I’m never letting go.” Now our painting is the first thing you see as you enter our home – truly an inspiring painting that is much more than art to us. It’s our love for each other, for our family and for our lives all captured and created together as a surprise for Jason. Well done, kids. Well done, Jenny.

Tags
I Love You I Live You Jenny McGee legacy paintings

Legacies of Love from Jenny McGee