A Club for EveryBODY

‘We had everything before us’

Stephanie Bell, an attorney at Blitz, Bardgett and Deutsch and current president of the Jefferson City Downtown Association, believes the proposed convention center should be located downtown.

“Speaking not on behalf of my law firm or the [Jefferson City] Downtown Association but as a concerned citizen, in 2011 the lodging tax campaign urged voters to vote yes to better downtown,” Bell says.

“All the campaign literature and ads sold the idea that the convention center would be located downtown,” she continues. “That’s why I voted for it.”

Bell points to several television and newspaper ads that specifically say the convention center will be located downtown. Although Bell admits the word “downtown” was not on the ballot, she is convinced that most voters, just like her, were voting to fund a downtown convention center.

History confirms Bell’s assumption that the lodging tax would fund a downtown convention center. Years before the 2011 ballot issue, the Jefferson City government purchased a house with plans to demolish it to make room for a conference center. One local television station reported the story in 2008, saying, “The city demolished what was the Bassman house to make way for the conference center.”

Bell cites another compelling reason the proposed convention center should be located in the downtown area. “We conducted a survey of meeting planners who voted 2-1 for a downtown site,” Bell says. “I think we should be going with the opinion of the people who will actually be using the facilities.” The meeting planners, according to Bell, wanted close proximity to the amenities offered by downtown and the state Capitol.

However, in the months between the passage of the lodging tax and the first call for proposals, one development group decided that the Capital Mall was a better location. The Jefferson City-based Farmer Holding Co. is proposing a $36 million hotel and conference center abutting the existing mall. The other proposal under consideration is from Ehrhardt Hospitality, out of Hannibal, and proposes a $24.6 million hotel and conference center on a site owned by the state near West McCarty Street in downtown Jefferson City.

Both proposals are now in contract negotiations with the city. Ultimately, only one will move forward, and according to city leadership, it could take as long as two years to make a final decision.

Regardless of which site is eventually chosen for the new convention center, Bell says she does not believe Columbia’s conference/convention market will be affected by Jefferson City’s eventual new facilities. 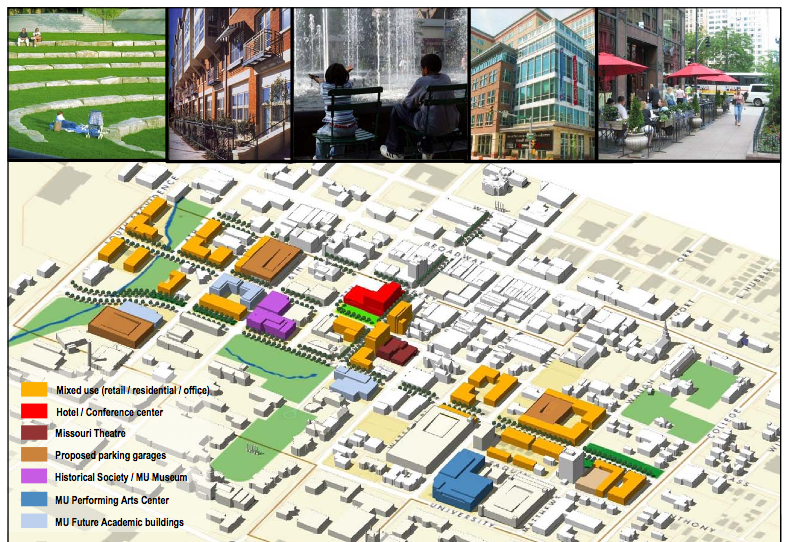 ‘We had nothing before us’

Unlike in Jefferson City, Amy Schneider, director of Columbia’s Convention and Visitors Bureau, doesn’t see a downtown convention center in Columbia’s near future.

Plus, according to Schneider, Columbia already has nine conference center/hotels that can meet the demand for groups of 300 to 500, the small to mid-market conferences.

“The Holiday Inn Executive Center is probably the best known, but we have several, and we also have meeting space at the university,” she says.

If guiding/planning documents such as the recently released “Columbia Imagined” are any indication, then a convention center has fallen off the list of top priorities for downtown. The city of Columbia, along with Boone County, the university and other groups, has been prolific in churning out long-range planning documents aimed at guiding the city’s future growth. “Columbia Imagined” is the most recent report, with a public draft posted for review on the city’s website Dec. 13.

Unlike previous reports, such as the “Land Use and Urban Opportunities Study: The Campus-Downtown District,” also referred to as the 2006 Sasaki Report, there is no mention of a convention or conference center anywhere in “Columbia Imagined.” The Sasaki Report identified specific areas for specific purposes, including a downtown area designated for a convention center, along Eighth Street.

More recently, the Charrette Report, published by the city of Columbia and the Downtown Leadership Council in 2010, also included maps designating certain areas as sites for a downtown convention/conference center.

Commercial real estate professional Paul Land doesn’t foresee a convention center/hotel in downtown’s future either, but his opinion is not based on city planning documents.

“All the long-range planning in the world doesn’t beat the marketplace,” Land says. “The marketplace drives the community.”

Land admits there’s nothing wrong with city leaders thinking strategically, but the guiding documents have no influence on customers wanting to buy commercial real estate in Columbia.

“We don’t even look at those things,” he says. “Depending on the type of customer, their decision is based on visibility, access, location or other criteria.”

“Eight out of 10 times when a customer has the choice between Jefferson City and Columbia, Columbia wins,” Land says.

Schneider sees it differently than Bell and Land. “We’re in competition with every city in Missouri every day,” she says. “Whether it’s Jeff City or Branson, the Lake, we’re competing with them.”

All the fretting about whether a convention center is crucial to revitalizing a downtown area may be misplaced, according to a 2005 research project conducted by Cornell University. The project examined the shared attributes and characteristics of 11 small and midsized downtowns across the country already deemed “attractive and successful.” Small to midsized included those with a population of 25,000 to 250,000 and had some affiliation with an institution of higher education. Rather than prescriptive, the Cornell report compiled and listed attributes of downtowns already determined to be successful. Most of the findings will not surprise you: vibrant shops, lots of pedestrian areas, blending of the college and downtown areas and so on.

But some of the findings were surprising. Most importantly, the research concluded there is “no single way cities with great downtowns deliver their downtown services.” Rather, each city built upon its existing unique strengths already in the community to plan for future revitalization efforts. The research designers assumed that cities with great downtowns would share similar downtown organization models; that was not the case.

In addition, the research confirmed that successful downtowns had “multiple traffic generators all within a short walking distance.” That’s not surprising; however, the research also concluded “serendipity had as much to do with some location decisions as did careful planning.”

In essence, the Cornell report urges cities not to rely on cookie cutter models of what is working in other similar cities but to exploit existing strengths and characteristics to enhance downtown areas.