New In Town >> The Business of Starting 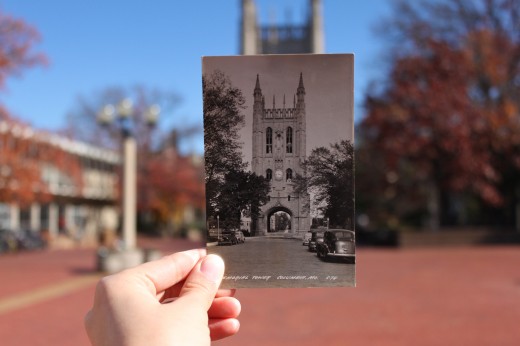 Heavy automobile traffic used to populate the street between the University of Missouri’s Jesse Hall and Memorial Union before the existence of Lowry Mall. Talks of transforming MU into a pedestrian campus began in the 1960s when students complained about dodging cars on their ways to class. It wasn’t until Barbara Uehling’s term as chancellor that talk became reality. Although most students and faculty were excited about replacing the road with a red brick pathway dotted by white concrete accents — a plan meant to tie together red and white campus — money was tight. The five-phase project, which also created Speaker’s Circle, was finally finished in 1984, almost entirely due to budget allocations from the Student Fee Capital Improvement Committee and the university.

Memorial Union, which was only the newly finished Memorial Tower in 1926, stands proudly at the east end of Lowry Mall. The World Wars and a lack of funding impeded construction, but the north and south wings were completed in 1952 and 1963, respectively. It’s tradition for students to tip their hats and speak quietly as they pass through the archway inscribed with names of 455 MU men who died in World War I and II. Today, the words of a pamphlet written in 1923 imploring alumnus to help fund the building’s construction still ring true: Memorial Union is a “grateful recognition of the sacred debt we owe to the brave sons of Old Missouri,” “a home in the heart of the University life” and where “the strongest and most democratic and best Tiger spirit will be created.”