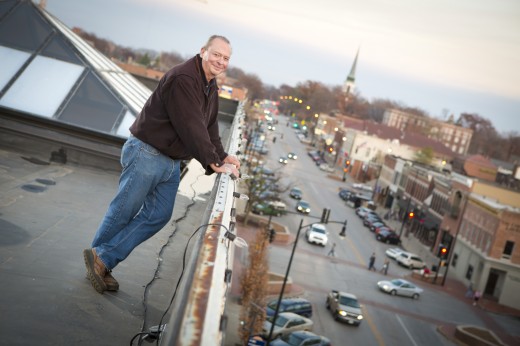 A roof over one’s head has long been considered a blessing. Through raging thunderstorms, scorching summer days or the bitterness of a Midwest winter, the overhang transforms into a shingled shield, a paneled refuge that absorbs blows on our behalf. In Columbia, the crew at Watkins Roofing Co. has been in the service of shelter for nearly 80 years.

“The business was started in 1933,” owner Dan Watkins says. “A current employee, Dan Coleman, found an old ad from the Columbia Tribune in 1933 with his dad in it. It was called Hobart & Son back then.” A framed cartoon advertisement from the newspaper illustrates three businessmen — Orville Hobart, Hillman Coleman and Richard Allen — and their new roofing company. It remained Hobart & Son until 1970 when Paul and Rose Watkins, Dan’s parents, bought and renamed the business.

Fourteen years later, Paul suffered a stroke, and the company immediately fell into Dan’s hands. “I was already in the roofing business,” Watkins says, “but it was a 24-hour event where I wasn’t in charge and then I was.” Despite the speedy and emotional turnaround that put Watkins in the commander’s seat, he has continued to flourish the business by providing top quality products and service. “We try to always treat the customers fairly. We treat our vendors fairly. We try to install an excellent product, and we go out of our way to do so.”

In fact, Watkins Roofing claims responsibility for many of the commercialized roofs in the area. “Dan Coleman installed the slate on the dome of Jesse Hall,” Watkins says. “We also did the flat section of roofing on the Mizzou Arena, and we have done every new elementary and middle school in Columbia during the past 15 years.” Additionally, the business constructed the roofing for multiple Landmark and US Banks, the MRI section of the Harry S Truman VA Hospital, several buildings at Lincoln University and Central Methodist University and the U.S. Federal Courthouse in Jefferson City.

Generally, the life span of a roof lasts about 15 to 20 years, but Watkins Roofing installed some roofs in the 1980s that are still functioning well. So what is to credit for all this success? “I think the key to success for every business is that you’ve got to get up and go in every day,” Watkins says. “Through good times or bad, you have to stick with it.”

One particular example of Watkins’ key to success is his mother. “My mom, who was my dad’s equal partner in the business, was my partner until about five years ago,” he says. “She is going to be 90 years old in December and still comes in to the office every day.”

In addition to Rose Watkins, many people contribute to the daily success of the organization. On any given day, there can be as many as 40 people out in the field working on projects. “Our field employees have huge responsibility,” Watkins says. “They are as big a part of our success as anything else.” The familiarity and camaraderie among colleagues is undeniable because many of them have been working together for decades. As 2013 draws nearer, the Watkins Roofing family embraces the excitement of 80 years in service.

“The saying is, ‘When you’re on your third time of reroofing the same building, it’s time to retire.’” Watkins says. “There’s plenty that I’ve been on twice, but I don’t think I’ve gotten to three times yet.” Perhaps in the next 20 years, after the life span of these new roofs has expired, Watkins will be leading the squad to celebrate the centennial.