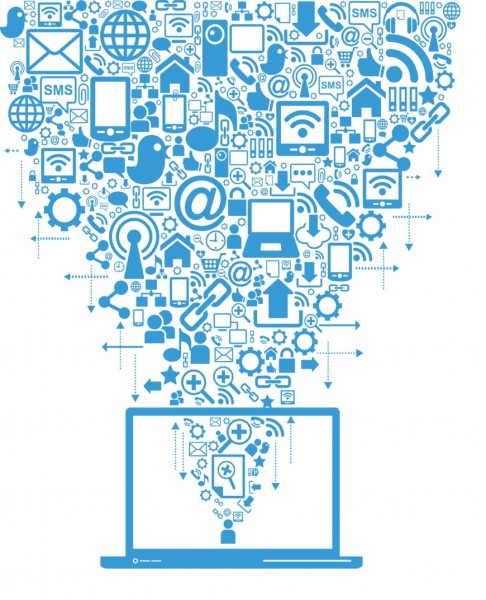 For the 60-second tutorial on how to succeed at social media marketing, head to the taproom at Shakespeare’s Pizza. Beer is optional, but do take notice of “The Traveling T-Shirt Wall.”

Back in the mid 1980s, two customers sent in a photo of themselves standing on a mountaintop in Nepal, each wearing a Shakespeare’s T-shirt. The owner loved it, mounted it on the wall and, voila, a new social network was born.

“You could say that Shakespeare’s fans have been ‘posting to the wall’ since before Facebook ever existed,” explains J. Michael Roach, one of the principals at Caledon Virtual marketing firm. “It’s actually a very effective social media strategy. It engages customers. It’s entertaining while still promoting the brand. It gets people talking about the product. It builds brand loyalty.”

When you get down to basics, there is nothing new about the idea of social media, Roach says. As human beings, we are biologically programmed to be “social networkers.” We make connections with friends, find life partners, and meet with groups of people in common places to talk about common interests. What’s different is that the Internet has provided a new place for us to meet and share those ideas.

Facebook, the world’s most-used social media network, was first launched in 2004 at Harvard University as a way to connect college students. In its first month, it attracted almost 20,000 users. At the beginning of 2012, multiple media sources reported that it is expected that the site will surpass 1 billion users by this summer.

“Social media and mobile marketing are absolutely where it’s at,” says Angela Lechtenberg, social media manager for True Media, a global full-service media firm based in Columbia. “They have been on an upward trend for years and they show no signs of stopping. The demand for social media campaigns just continues to skyrocket.”

Without a doubt, the Internet has fundamentally changed the way brands interact with potential customers, Lechtenberg says. In more traditional methods such as commercials and print ads, for example, the conversation was one-sided. Businesses delivered the message, and that was that. But in today’s world, there is a two-way conversation that allows customers play a much bigger role in the company decision-making process.

The sooner a company finds its place in the social media world, the better, Lechtenberg advises. To have a voice in that community is an important advantage in today’s commercial market.

“Businesses and customers are out there talking; and if you’re not in that conversation, you’re leaving a void,” Lechtenberg says. “Research shows that customers who engage with a brand on social media tend to be more loyal to the brand, willing to spread the brand’s message and also to become repeat customers.”

Anna Lawrence, associate partner at Word Marketing, says a common mistake is that companies often misjudge the work involved in running a successful social media campaign. Business owners want to handle it themselves, but soon discover that they don’t have the time to attend to all the elements that make a campaign successful.

At a minimum, companies should post new information three times a week — each time creating opportunities for interaction and dialogue. To be effective, there needs to be someone listening and responding, creating a two-way conversation. Studying Internet and marketing trends is another element.

When handled correctly, that dialogue can become a valuable customer service tool. Lawrence says that’s because people believe people. People trust what they see, hear and read from others like themselves. And now, through social media sites, customers can get reviews and opinions from hundreds of other people.

That dialogue can also build brand loyalty. There is a level of transparency for those companies that open themselves up to social media, whether their customers are happy or unhappy. Customers who feel they are being heard by a brand are more likely to develop a certain trust.

And last, but certainly not least, businesses need to understand the metrics of their campaign, or the measure of their efforts. The way to do that, says Lawrence, is to define goals while creating the campaign strategy: What does the company want to accomplish? Who is the audience to be reached? Which sites best serve those needs?

Most social media sites offer metrics feedback, but even if they don’t, she says, looking at who is following the brand, who is reposting the information and who is interacting will provide a good understand about whether the campaign is effective.

“There is no set way to conduct a social media campaign.,” Lawrence says. “Each one is unique, and success is based on each company’s needs and goals.”

As a business, you really can’t afford to ignore Facebook. Whether you embrace it or not, conversations about your brand are occurring there all the time. With just a little effort and devotion, you can keep current customers coming back and win over new ones.

Here are some tips to get you started.

Don’t talk about your brand too much— Customers understand that you have things to say about your store, sales to promote and other housekeeping items. But constant talk about the same thing will only result in boredom. So …

Edit headlines and sub-headlines— After placing a link in the share field on Facebook, take a moment to edit the headline and sub-headline, as well as select the appropriate image once the link populates and appears below the share field. After doing so, delete the original link before hitting share (the populated link and image won’t go away). Doing so presents a tidier post and encourages interaction.

Comment— After posting content, it is essential to check back later to address comments. Comment just like everyone else. Multiple times if you want. Be a part of the conversation. You can also address specific people in a comment by putting their name after the @. It’s just another way to be personable.

Remember: Facebook is a community— As the owner of a Facebook page or profile, you are the host. Make your followers and friends feel welcome and treat them with courtesy. Remember, social media calls upon us to use the same good judgment we use in face-to-face interactions. Show people that you value their involvement in the community and they’ll come back.

Be genuine— Remember that social media is powered by the “social” part. While it’s important to maintain a “voice” online, it’s also important to be human and authentic, and to remember social media is not about broadcasting your message, but about the two-way conversation.

Don’t overthink it— Keep it simple. If you own a pizza parlor, ask your fans to click “like” if they like pepperoni. Or ask them to comment and tell you their favorite toppings. You could use that information to create a Facebook special.