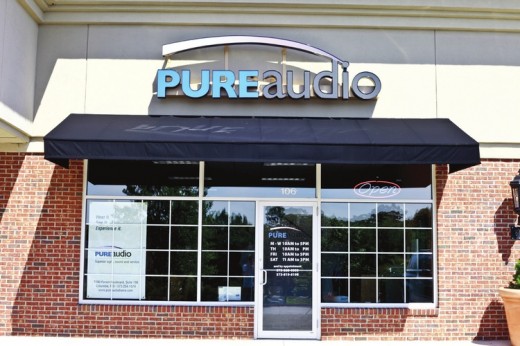 When John Schuppan renovated his home in the Old Southwest, all he wanted was a remote he could understand and great sound in every room of his 100-year-old home. It sounds simple, but after months of looking for a solution, Schuppan said he was at his wit’s end.
That’s when he contacted Travis Huff and Sam Jones of Pure Audio & Video Specialty, a Columbia firm opened in 2006 dedicated to designing, installing and servicing quality Hi-Fi systems and high-definition theater systems.
“I wanted to be in any room and hear music and hear it well, and I wanted the new system to work with the old system,” said Schuppan, operations manager at Textbooks.com.
Today, he said it all works, and the remote fulfills one of his requirements: It’s so easy his mother can operate it. “It passed the Mom test,” Schuppan said.

Leave it to the experts
Schuppan admits the project was complicated. When he’d renovated his home in 2006, he’d had a system installed, but when he added on a master bedroom, bath and basement entertainment area — yes, he added on a basement — he wanted to relocate the stereo system into the basement and install two TVs. He also wanted the house wired for on-demand movies and patio speakers installed.
Schuppan also wanted a system that was seamless and easy to operate. He’s not a Web guy, he said, and not a sound system or home theater expert. In fact, he just recently learned speakers have to be tuned. All he knows is Pure Audio “fixed something in the wall,” and his system sounds better. That, he said, is all he needs to know.
Creating a system that makes music sound great comes naturally to Pure Audio co-owners Huff and Jones.
As Huff explained, “I play seven instruments, two of them pretty well,” and he writes and collects music he loves to share with his family and friends. Music has been a huge part of his life; the Columbia native has a college degree in music performance.
His partner, Jones, has been a collector and audiophile since the 1970s, Huff said, when LPs were king. “We still love the realness you can only get from vinyl,” he added, noting that Jones has one of the best listening rooms around.
Birth of a business
Long before opening Pure Audio, Huff said he and Jones were designing, configuring, setting up and modifying sound systems. The two decided to open Pure Audio after “months of discussion and brainstorming,” Huff said.
At the time, Jones was working at Boone Hospital Center in management, but the two had an addiction to audio systems that bring out the best in recorded music. “We decided that we wanted to do something that we truly had a passion for,” he said.
Today, the company includes Huff and Jones as well as lead technician Chris Dennis. “Chris has been an integral part of Pure Audio for over four years and has been essential to our success,” Jones said. When the company started, they installed 10 home theater or audio systems a year. Today, they install 20 to 30 systems a year including audio visual presentation and conference room systems for businesses.
Both men also credit the support of their wives for the success of their business. “Our spouses are our biggest supporters as well as being co-owners,” Jones said.
Projects range from upgrades and installations such as Schuppan’s to work on new homes, such as a recent whole-house system that included a cutting-edge home theater installation in the new home built by Cara and Jeff Canon in Sedalia. The home theater included extensive sound proofing, wiring, cabinetry, lighting and theater seating.
The Canon home theater project was one of Pure Audio’s biggest efforts and gave the Canons something they craved: the ability to watch MU games as if they were there. The Canons operate an international business, which can make catching a Tiger’s game difficult. But with their new home sound and theater system, Cara Canon said, “The sound of each event is like being there in real life.”
Creative thinking, happy customers
Since opening the doors of Pure Audio, Huff has been developing relationships with contractors and builders, and the company is the provider of stereo, telephone and video systems for builder Don Stohldrier of Lifestyle Homes. Stohldrier said his firm builds roughly 10 homes a year and appreciates Pure Audio’s work in helping customers choose a whole-house system and then showing up on time to install it quickly and efficiently.
Yet, Bill Baird, Lifestyle Homes’ broker, said Pure Audio provides something just as important as a good home audio/video system. “I don’t care what kind of equipment you install, and they (Pure Audio) install excellent equipment,” he said. “If you don’t provide good service and it’s not a good setup for the customer, it doesn’t matter.”
That’s exactly what Shelley and Sanjeev Ravipudi appreciated about Pure Audio — but from different perspectives. When the Ravipudis renovated their Bluff Creek home by adding a master bedroom and bathroom, Sanjeev Ravipudi wanted a 50-inch flat-screen TV and sound system installed. “You know, boys and their toys,” he said. His wife, Shelley Ravipudi, however, wasn’t as enthusiastic about
that idea.
“I didn’t want the television to be the focal point in the bedroom,” she said.
To solve the problem, Huff installed a glass over the television screen and surrounded it with a frame. Now, when the television is not on, Shelley said, it looks like a mirror with a pretty gold frame. The rest of the equation involves concealed wires, speakers and components, all integrated into the system in the rest of the house, which makes it all easy to operate and provides great sound and video. “It’s all linked to our iPod, CDs, DVDs and Blu-Ray,” said Sanjeev Ravipudi, a cardiologist. “It can accommodate new items.” Not that he’s thinking of adding any new components, Shelley. Really.
And both Shelley and Sanjeev like the fact that Pure Audio met with them and installed the system they wanted at a price that was reasonable. As Sanjeev Ravipudi put it, “You can go crazy with this kind of thing, and we didn’t want to spend an outrageous amount.”
The result is both the Ravipudis and Schuppan love their new systems.
“It’s seamlessly connected all throughout the house,” Schuppan said. “And it works.”