After working with the city of Columbia to provide tax incentives and build a parking garage, Dave Parmley’s company, Broadway Lodging LLC, intends to build a hotel at 1112 E. Broadway, the site of the Regency Hotel. 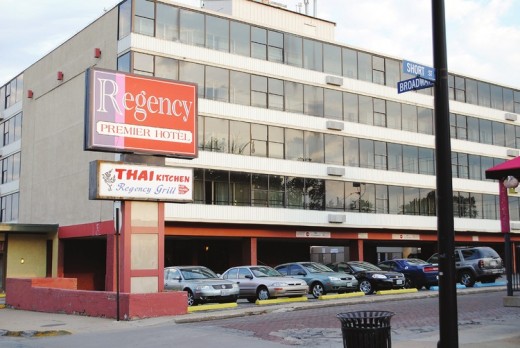 Workers in the coming months will raze the Regency and begin building the seven-story, 114-room hotel, which is scheduled to open in spring 2013. Broadway Lodging announced in June that Hilton Corp. approved the franchise application, and the new hotel will be called The Broadway, a Doubletree By Hilton.
Parmley got his start in the hospitality industry waiting tables at resort restaurants in Lake of the Ozarks during summer breaks from Central Missouri State University. His first job in hotel management was in 1983 at the former Campus Inn on Stadium Boulevard in Columbia, where he was director of sales.
“I was 22, single and had maid service and free food and beverages,” Parmley said. “Not a bad setup.”
He went on to run several hotels in the St. Louis area for Don Breckenridge, who owned a chain of hotels under the Ramada franchise.
In 1997, Parmley built his first hotel, the Hampton Inn in Chesterfield across from the mall. Three years later his development company built a second hotel two miles away, and in 2007 he bought an existing Hampton Inn Suites in Steamboat Springs, Colo.
That same year, while in Columbia for his 11-year-old son’s baseball tournament, he drove by the Campus Inn, which was “pretty run down at that point.”
Parmley tracked down the owner in St. Louis and just happened to call the day after he put the hotel on the market. Parmley’s company bought the property, razed the hotel where he worked a quarter century before and built the Stadium Hampton Inn.
Parmley later bought the Regency and began the long process of getting financing and a franchise agreement for what’s turned out to be a $19 million redevelopment project. Both Hampton Inn and Doubletree are under the Hilton umbrella.
Parmley expects to be in Columbia several times a week but will continue living in the St. Louis area; his daughter will be a senior at Parkway Central High School, and his son is a freshman at the school. “But I would love to move to Columbia at some point in career, my life,” he said.


What’s the reasoning behind the naming of the new hotel and the decision to go with the Doubletree franchise?
Parmley: “All along I wanted to do something atypical, something with a boutique-style feel to it. One night I stayed in a hotel in Chicago’s theater district called The Wit, a Doubletree Hotel. It was very well executed. I looked around and found there were three or four other Doubletrees that have recently opened, including one in Denver and one in Long Beach. This is the direction that Hilton was taking, allowing Doubletrees to become more boutique and have unique monikers. Downtown Columbia is unique, so I wanted something fitting. Once I figured out they might let me go that direction, I formally applied for a franchise.”
How did the name come about?
Parmley: “They gave me the option of anything I wanted. I ran through all kinds of names. In the end, I kept coming back to The Broadway. It’s geographically specific, and it sounds urban. (Parmley pointed out that the former name of the Regency was Broadway Hotel, and it was known to have been in bad condition). [Former Convention and Visitors Bureau Director] Lorah Steiner, she and I go way back; she was director of sales for the Ramada when I was director of sales for Campus Inn. She didn’t like the name because of the connotation, but I said, ‘Lorah, most people won’t have memories as long as we do.’”
You’ve said in the past that a hotel’s location is critical. Why is this spot in downtown Columbia attractive?
Parmley: “It’s at the gateway to downtown, the first thing you see rolling down Broadway. There might be plenty of hotels in Columbia, but the problem is the majority of them are in the wrong places. The premise is: What are the demand generators? It’s the two colleges and university. People want to be near the university. If you’re coming to Columbia for some reason, it’s probably going to be university-related. Why would you want to be staying out by the highway [I-70 or U.S. 63] listening to the trucks go by and eating at an Outback Steakhouse when you could stay somewhere nearby that’s also near a lot of nice shops and restaurants?
“A lot of people want to go out and have a few drinks and then go back to their hotel without driving. We see that as a plus, too. It also struck me early on that it’s amazing a place like downtown Columbia doesn’t have a nice, upscale hotel.”
Won’t The Broadway and the Tiger Hotel be competing for the same clientele?
Parmley: “On some level, but I think the pie is big enough for both of us. There’s always going to be a market for people who might like to stay in some place that’s historic, traditional. The new hotel will have a more edgy design, a fresh look, kind of high-tech. And the Tiger is going to be about 60 rooms — that’s not a lot in the marketplace.”
It seemed to be a grueling process to get the city to approve the TIF proposal and get the parking arrangement worked out. Getting financing during tough times economically must have been an ordeal, and the previous negotiations to make it an Indigo Hotel fell through. Was there ever a time when you thought, ‘This is never going to happen?’’’
Parmley: “Not totally. I tend to be an optimist by nature. That said, I’m realistic, too. The financing market is in shambles. … I did comment, once the final piece fell into place, that I was really tired. After a year and a half, I was just getting to the beginning, starting plans of what the hotel will look like, how it will operate.
“I wasn’t overly worried about the TIF process because of what (Tiger Hotel owners) John Ott and Dave Baugher did, blazing the trail and taking the heat. I knew inherently that this project made sense from a TIF standpoint. On the other hand, what should have been a slam dunk, the parking garage, became a bigger problem because people are upset by the size of the other garage [at Sixth and Walnut streets]. I kind of became a whipping boy for the other garage, in some sense. (Parmley pointed out that the city worked with previous owners of the Regency on redevelopment proposals and have talked about building a parking garage on Short Street for years.) But it wasn’t an idea unique to me.”