The framed document Dave Benish gave Delta Systems owner Steve Powell during the celebration of the company’s 25th anniversary doesn’t look like much: a notebook page with a handwritten slogan below a triangle that was drawn by his late wife, Debin Benish.
But Powell said he couldn’t imagine a more fitting gift. It came from the notebook Debin Benish used in 1986, shortly after moving to Columbia from California, to sketch her plans for a computer training company.
As the accompanying photo illustrates, the Greek letter Delta symbolizing change and the mission, helping customers manage change, became the basis for the company’s mission and its logo, which have lasted a quarter century.
Powell pointed out that the company itself has had to manage vast and fast-moving changes in technology during the years. Soon after the company opened, customers began asking for help managing databases and hardware networking. So Benish hired experts, and Delta’s “morphing,” as Powell put it, never stopped. 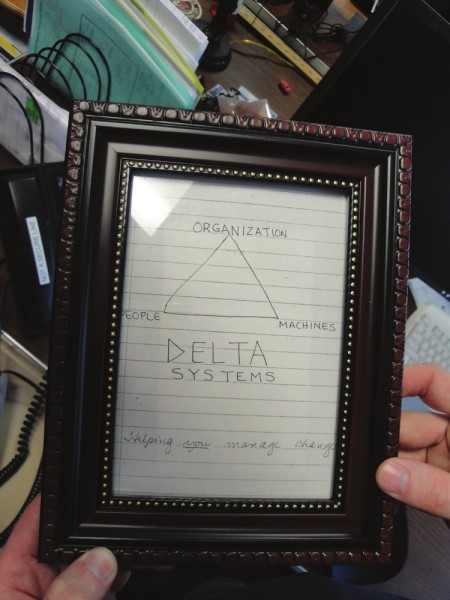 Al Marklin, who was the second person Benish hired and is still working at Delta, pointed out that the smartphones many people were carrying at the outdoor event May 20 are about thousands of times more powerful than the computers they worked with in the company’s first few years.
In 1986, he said, processors typically had a high speed of 2 megahertz, though there were “turbo” machines with 4Mhz and a whopping 4 kilobytes of memory.
“It’s always been a challenge keeping pace with technological changes,” Marklin said shortly after the Chamber of Commerce’s ceremonial ribbon cutting under a tent next to the Delta Systems offices on Corporate Lake Drive in south Columbia. “You get behind pretty quickly if you don’t devote a significant amount of time to keeping up.”
The computer consulting company builds online applications and data management systems and in 25 years has provided services to more than 800 companies, organizations and government agencies.
This year, Delta won an advertising federation award for an interactive website it built for Boone County Ham. In 1986, there was no such thing as a public Internet.
Here is a timeline of some company and technological milestones:
1986
• Company founded. Debin Benish works from home providing training and consulting for people moving from typewriters to computers. Training specialized in Microsoft Office and Word Perfect.
• Microsoft begins selling Windows for IBM computers, and IBM comes out with a PC with 1 megabyte of RAM, a 1.2-megabyte floppy disk drive and a 40-megabyte hard drive.
1988
• Delta opens an office in downtown Columbia with a classroom. Services expand to include PC and network support.
• Steve Jobs, after leaving Apple to form his own company, unveils the NeXT, the first PC with a drive for an optical storage disc and other innovations. But it turned out to be too expensive, at $6,500, and slow to become popular.
1991
• Delta moves its offices to southeast Columbia, near Grindstone Park, to accommodate a second classroom and additional parking for a staff that has grown to 12. The following year, the Chamber of Commerce named Delta Systems the Small Business of the Year.
• Designed by Finnish student Linus Torvalds, Linux is released to several Usenet groups, and in 1992 it became free, or open source, software.
1996
• Delta Systems celebrates its 10th year, a point in which dozens of classes are held every week, 70 percent of the business is training and 30 percent is database development and network support.
2003
• Delta moves to 200 Corporate Lake Drive. PC and network support department doubles in size. Training dwindles to 5 percent of business.
2005
• Steve Powell buys Delta Systems from Debin Benish. Chamber of Commerce names Delta a Small Business of the Year Finalist. Delta begins the Debin Benish Outstanding Businesswoman Award. The next year, service expands to include custom software development, Web development and other offerings.
• Microsoft announces the upcoming release of Windows Vista, and Intel releases the Pentium D, its first dual-core, 64-bit processor.
2008
• After expanding the offices to accommodate growing staff, Delta opens a branch office in Colorado and has established partnerships with 14 companies in six states. By the following year, the staff had grown to 14.