As a partner in Kilgore’s Medical Pharmacy, Ann Bromstedt knows what ails an ever-increasing number of people: diabetes, high blood pressure, obesity.
She also knows that many of these diseases could be alleviated with better nutrition.
That’s why she’s so passionate about the community garden Kilgore’s created last year next to its Providence Street location and why they’re expanding it by one-third as well as increasing expenditures on it to create a landscaped oasis of produce production. 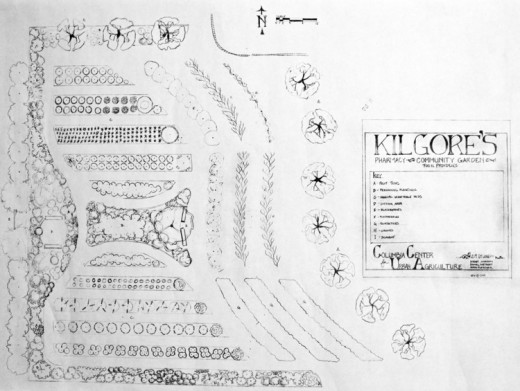 That’s also why almost all the produce grown at the former vacant lot goes to the Nora Stewart Early Learning Center, a nearby educational daycare that serves more than 50 children from ages 2 to 10. Last year, they also sold some of the produce, cucumbers, cantaloupes and tomatoes from a basket at the pharmacy counter, and the $100 made from that also went to the nonprofit daycare.
Bromstedt said she believes the garden is first an educational center, which will help children learn about the benefits — and joys — of fresh food. She hopes that someday moms and dads picking up their children at the nearby center will stop by the garden for strawberries for dessert that night or tomatoes for tacos rather than stopping at the nearby fast-food restaurants.
But if nutrition can help minimize disease, isn’t the garden being tended by community and pharmacy volunteers going to hurt her business?
Bromstedt isn’t worried.
“It is not a PR stunt,” she said. “We’re leading the way. That’s what businesses should do.”
She’s backed by the four other Kilgore’s partners, including Bob Kilgore, Bill Morrissey, Beth Stubbs and Laura Kingsley. In fact, in addition to expanding its size, the pharmacy this year is spending five times as much on the project.
Last year, Kilgore’s put roughly $3,000 into turning the weedy field into a garden. This year Kilgore’s is transferring advertising dollars so the pharmacy can put $10,000 to $15,000 into the project. They’ve hired the Columbia Center for Urban Agriculture to create a plan for the garden, which will include fruit trees, berry plants, walks, areas to rest and advice and guidance on how to get the most out of the corner garden.
Bromstedt’s not the only businessperson who thinks donating to gardens is good business. JoLynn Miller, an independent BeautiControl consultant, helped the Nora Stewart Learning Center apply for a grant from BeautiControl W.H.O. Foundation, and part of those proceeds will go toward funding the garden. Atkins Inc. also donated the installation of the sprinkler system using parts donated by Kenney Outdoor Solutions, said Emily Thoroughman of Atkins, who serves on the Nora Stewart board. “Early childhood education is crucial…and Atkins is proud to support that,” she said via email.
Other contributors to the Kilgore community garden include Rost Landscaping as well as Bucket Media, which set up a Facebook page for the garden.
Although Bromstedt is clear about why the garden is important, she’s also pragmatic and noted the land wasn’t being used and in this economic market probably would not attract much interest.
That pragmatism is the same thing Mark Stevenson of REMI expressed when asked why he allows four community gardens on various plots of land in Columbia. “I was hungry (when they asked me),” he joked, but added, “It was vacant ground…and I don’t have to mow it.”
Then, on reflection, Stevenson noted he comes from an agricultural background, having grown up in northwest Missouri, so he supports people growing their own food.
“It’s good for people to eat good food and to meet each other and not be isolated,” he said. “It’s a good community service.”