Landmark Bank President Andrew Beverley pulled out a printout from a 5-year-old power point presentation to illustrate the progress of Columbia’s angel investment group and the city’s symbiotic support system for startup companies.
Beverley, one of the founders of Centennial Investors, pointed out that the MU Life Sciences Business Incubator and Discovery Ridge research park were still in the planning stages back then, and his group was still short of qualified investors.
When Beverley was making his presentation in 2006 during a member recruitment meeting at the top of the Tiger Hotel, one of his arguments was that MU research funding was at an all-time high and likely to continue growing.
“We didn’t know if we would find enough people to invest and if there would be enough deals to look at,” Beverley said during a recent lunch forum at the Tiger Hotel that brought together members of Centennial Investors and leaders of startup companies they’ve invested in.
Now, Discovery Ridge has two major tenants, the Business Incubator is nearly full, and startup companies are taking MU research from lab to market at a record rate. CI has more than 50 members who’ve put up more than $2 million in early-stage funding for nine fledgling companies and mentored their inexperienced executives.
“It gives you an idea of just how much has happened in a few years,” Beverley said.
Centennial Investors was founded during the 100th anniversary of the Columbia Chamber of Commerce, which covered the startup costs and still manages the group’s finances. Members are required to be “accredited investors” as defined by the Securities and Exchange Commission, which means having a net worth exceeding $1 million or annual income exceeding $200,000.
There are, generally, three levels of early-stage financing needs. Seed capital, the money typically used to help validate an idea, generally ranges from $5,000 to $30,000 and often is provided by friends and family members rather than risk-averse banks. Angel investments are generally more than $100,000 and target established companies; venture capital investments are usually greater than $750,000 and typically run in the low millions.
Incubator CEO Jake Halliday, who coordinates the screening of applicants seeking CI investments, said they’re getting “slammed” with 15 to 20 solicitations a week.
Beverley said now that CI has answered the initial questions about the flow of prospective deals and investments, “there are a different set of issues,” such as the management of the companies and the marketing of products and services.
And now that CI is filling startup needs at the angel investment level, its members and other advocates for entrepreneurs are developing ways to fill other holes in the system for bringing ideas to market. They’ve helped develop a student angel investment network at MU, started a series of educational seminars and put together an entrepreneurial summit two months ago that drew 250 participants.
Brent Beshore, a CI member who founded Pure Partners and the League of Innovators, said entrepreneurs often don’t have the support network or personal funds to meet their seed capital needs.
“Right now in Columbia, that gap has not been filled,” Beshore said during the forum.
Beshore is organizing a seed capital funding process that will target entrepreneurs involved in emerging media and communications technology. They’ve put together $400,000 and brought in a managing director for the “accelerator” that’s modeled after LaunchBox Digital in North Carolina.
LaunchBox Digital describes itself as a seed-stage investment program helping entrepreneurs maximize their chance of success through hands-on mentorship. Once a year, LaunchBox selects seven to 10 teams out of hundreds of applications to receive $20,000 in seed funding, three months of mentorship and the opportunity to pitch to more than 100 venture capitalists and angel investors at the conclusion of the program.
“The model has proven to be very effective,” Beshore said. 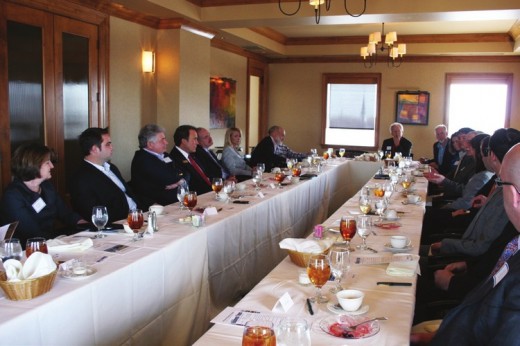