For a plain red-brick warehouse built in 1924 and originally used to store groceries, this was quite an honor. 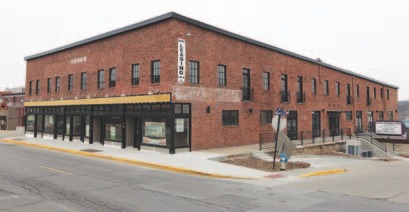 John and Vicki Ott, owners of Alley A Realty, were in Jefferson City on Wednesday to receive a Preserve Missouri Award for the renovation of the Berry Building at the corner of Walnut and Orr streets.
Once nearly derelict, the 33,000-square-foot building gleams, filled at the street level with PS: Gallery and a sales and marketing office for Independent Stave, a firm that manufactures and sells wine and whiskey barrels all over the world. Also at the street level will be Pure Exposure, a working photography studio and gallery.
The first tenant was Wilson’s Fitness on the lower level. All 12 of the luxury loft apartments on the upper floors are leased.
“I was quite excited to represent Columbia with this honor,” John Ott said. Missouri Preservation, as a state organization, has the best understanding of the state’s inventory of historical projects, which makes the Berry Building’s placement among the seven honored buildings significant, he said.
It’s also a rare honor for Columbia. Ott said, given the numbers of projects from cities such as Kansas City, St. Louis and St. Genevieve, having a building in Columbia among those honored is quite a recognition for preservation in Columbia.
Missouri Preservation is a nonprofit dedicated to historic preservation promotion, support and coordination. The event, sponsored by a number of firms including Commerce Bank and Murry’s Restaurant, included a presentation ceremony, luncheon and keynote address by Lt. Gov. Peter Kinder.
Others who attended the event with the Otts were those who helped in the $3 million renovation of the Berry Building. They included: Susan Hart, vice president of Huebert Builders; Wayne Huebert, president of Huebert Builders; Nick Detert of Putnam Studio 1012 Interiors; Stephen Bourgeois of Peckham & Wright Architects; and Deb Sheals, a historic preservation consultant based in Columbia.
It’s the first time a Columbia building has been among the buildings honored by Missouri Preservation since 2008, when the 1927 Central Dairy Building was honored. The year prior, 2007, both the Howard Municipal Building and Gentry Buildings on Broadway were honored.
Ott has been renovating historic buildings for decades. He started in 1993 to 1994 with 823 E. Broadway, which now houses My Secret Garden and for years before that Tucker’s Jewelry. At the time, he owned the building with David Baugher and Al Germond, present owners of the Columbia Business Times. Ott owned the radio station that occupied the building prior to its renovation. That renovation project went on to receive the Missouri Main Street Award.
Since then, Ott of Alley A Realty has renovated a long list of historic buildings, including the Tiger Hotel. Again, Ott, Baugher and Germond are owners of the building and have renovated the exterior and put $5.2 million into the project during the past five years. Currently, the ninth floor is used for special events, catering and some offices, while Bleu Restaurant and Wine Bar occupies part of the street level, and the Vault, a speakeasy, is on the lower level.
Ott and his partners recently found an investment developer, Glyn Laverick, who as Columbia Hotel Investments is planning to complete the project of turning the Tiger into a boutique hotel. The nearly $9 million redevelopment project is contingent on approval by the Columbia City Council because part of the costs will be covered by Tax Incremental Financing. TIFs use tax revenues to reimburse the developer a small portion of the costs of the project during a period of time as long as 23 years.
Council approval could take place as soon as the March 7 meeting.
Other Alley A Realty Historic Buildings
McGlasson Distributing Building at 1020 E. Walnut, which now houses the Columbia Music Academy
823 S. Broadway, which now houses My Secret Garden
Paramount Building at Ninth and Cherry, which now houses Kaldi’s Coffee and Bangkok Gardens
South Ninth Street properties, which now house several retail firms including Belle Boutique, Blackberry Exchange and Alexander’s Jewelry
906-914 Broadway, which now houses Breeze, Elly’s Couture and the Saigon Bistro. The back of this historic block is occupied by Kampai, a sushi restaurant, and three loft apartments.
1019 E. Walnut St., Artlandish Gallery
1013 E. Walnut Street, Rock Bottom Comics and
The Bead Gallery
1023 E. Walnut St., North Village Art Studios
918 E. Broadway, Grace, a retail firm that offers antiquities and architectural elements