Economist measures recession’s local impact.
In the spring of 2007, city officials asked MU’s Community Policy Analysis Center to contribute to Imagine Columbia’s Future, the visioning initiative that began in 2006.
CPAC agreed to do a baseline study of the Columbia/Boone County economy and provide 2015 projections. The study included historical patterns of population, employment, commuting, taxable retail sales, county revenues, housing sales and other key economic and demographic variables.
The study by experts at CPAC and the Office of Social and Economic Data Analysis, funded by the city and MU, was completed in early 2008. That’s about the time when the federal government finished analyzing economic activity during Q4 2007 and declared the economy was in recession.
A committee within the National Bureau of Economic Research said the recession officially started in December 2007 and, last month, declared that the recession ended in June 2009.
At 15 months, this was the longest recession since the end of World War II. It also was the worst in terms of job losses. US unemployment rose from 4.9 percent to 9.5 percent in June 2009. The housing and financial markets plummeted.
Before the Great Recession, the conventional wisdom was that Columbia’s economy was relatively recession-proof because of its reliance on three stable industries: higher education, health care and insurance.
So just what was the recession’s impact on the local economy? How did the national downturn affect CPAC’s predictions?
Those are the questions CPAC Director Thomas Johnson addressed in a follow-up study presented to the Columbia Rotary Club last month.


First, here are some of the 2005-2015 projections for Boone County:
•    Total population will increase 22 percent to about 180,000.
•    The total labor force will increase 21 percent to more than 130,000.
•    The number of unemployed people will increase by only 429 people. (The unemployment rate at the time of the data gathering in 2007 was 3.6 percent.)
•    Retail sales will increase 24 percent.
•    The demand for housing will increase 22.5 percent, or 12,944 units to 70,422 units.
•    Assessed property values will increase nearly 30 percent.
•    Median housing value will increase by $2,810 to $125,569, or 2.3 percent.
•    Median household income (in real 2005 dollars) will increase by $1,810 to $45,000, or 4.2 percent.
•    Taxable sales will increase 24 percent to $2.7 billion.
•    Public expenditures (demand) will increase 2.3 percent per year, and revenues will increase 2.1 percent per year.
During his presentation, Johnson projected slides with charts that showed declines in six key categories in 2009. Here are the categories, followed by projected amounts and actual amounts:
•    Total population: 158,722; 156,777 actual
•    Total labor force: 92,182; 87,567
•    Employment: 115,067; 112,891
•    Unemployed: 3,141; 3,826
•    Occupied housing: 1.06; 1.04
•    Housing rental price index: 1.01; 1.11
Johnson said the unexpected, sharp rise in the housing rental price index from 2008 to 2009, about 10 percent, was “a correction in the market.”
In general, when the market for individually owned homes is robust and the demand for rental housing is relatively low, rental prices are tamped down. When fewer people are buying homes in a down market and more are renting, prices rise.
Columbia among creative class
Johnson’s presentation turned positive when he looked at the foundations for future growth in Columbia.
An analyst who writes for the Atlantic Monthly Group included Columbia when mapping the projected growth in high-paying, high-skill jobs for knowledge, professional and creative workers who make up the “creative class.”
The fields included health care, science, technology and engineering; law, health, business, finance and management; education, the arts, media and entertainment.
“Creative class jobs will make up roughly half of all projected US employment growth — adding 6.8 million new jobs by 2018,” Richard Florida wrote in a recent blog post for theatlantic.com.
Florida also pointed out that creative class employment has seen relatively low rates of unemployment during the course of the economic crisis.
The cities with the biggest gains by percentage change in creative class jobs included Columbia and several other college towns.
Gainesville, home of the University of Florida, topped the list with a projected 17.7 percent increase in creative class jobs, and Columbia was No. 8 on the list with a projected gain of 16.4 percent.
Johnson, in his analysis of growth factors, said Columbia stands out in all of the areas. They included more retirees, natural amenities, growth in faculty numbers and in state and local government employment, which applies primarily to MU employment in Columbia. (The report came out before President Gary Forsee said the UM System might have to deal with a 10 percent cut in the next state budget and raise tuition.)
“This is the basis of our success,” Johnson said, “in the past and in the future.” 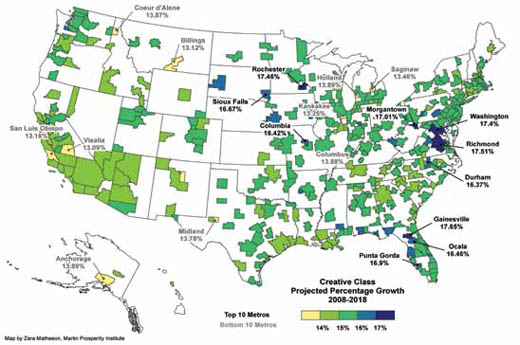