The new $12 million Holiday Inn along Interstate 70 on the city’s east end has finally opened, after a two-year delay matching the length of the recession.
The opening of Columbia’s 37th hotel, which the owners and the business community will celebrate on Oct. 12, also comes at a time when the local hotel market is on the verge of reaching pre-recession occupancy levels, according to an analysis of the 4 percent room tax revenue collected by the city.
“It’s been a good year for us,” said Lorah Steiner, director of the Columbia Convention and Visitors Bureau, which channels the revenue into the tourism development fund.
The hotel market upturn began with a sputter in November, the first month since the beginning of the recession in which room tax revenue was higher than the same month of the previous year. The revenue dropped again during the winter, but in March the upswing seemed to gather momentum. 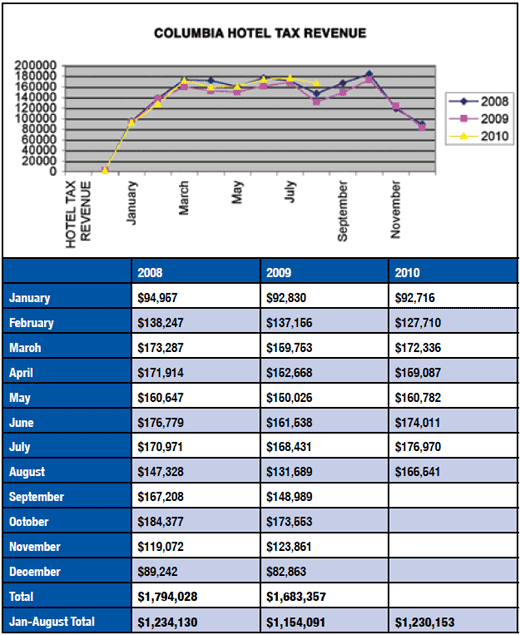 In that month and every one since, occupancy increased. In August, room tax revenue was 18.5 percent higher than in August 2009 and about 12 percent higher than in August 2008.
Revenue during the first eight months of the year nearly matched the amount through 2008, and if the trend holds, the local hotel market will be back to pre-recession levels by the end of the year.
That’s good news for everybody in Columbia because an increase in hotel occupancy indicates an increase in business activity. Sales people are on the road selling more products and services, consultants are getting more work and business gatherings are happening more often and lasting longer. People are traveling more, which is particularly good news for cities along an interstate highway such as Columbia.
Steiner said the hotel business “tends to be behind the market in a recession,” and an upswing typically precedes an upturn in the overall economy.
“I’m hopeful it’s a harbinger of great things for the rest of the economy,” she said.
Steiner called 2008 “dismal” for the hotel industry and 2009 “just horrible.”
However, the city was overbuilt with hotels well before the start of the worst downturn since World War II.
Seven hotels with 780 rooms were built between 2003 and 2006, a spurt that ended with the Hilton Garden Inn on US Highway 63 in the northeast and the Courtyard Marriott on US 63 in the southeast. Occupancy rates dropped below the 60 percent considered healthy for a hotel market. The building continued, with George Pate’s Fairfield Inn along Clark Lane and David Parmlee’s Hampton Inn near the MU stadiums, which replaced Campus Inn.
Pate partnered with Ramesh Patel to form Premier Hotel Group and build the Holiday Inn at Lake of the Woods, originally scheduled to be finished in the fall of 2008. The five-story hotel with 126 rooms would push the total number of hotel rooms in Columbia to more than 3,800.
But the project stalled as the freeze in business activity at the height of the recession forced the Texas contractor into bankruptcy. The city’s overall occupancy rate dropped to about 53 percent in 2008 and less than 50 percent in 2009. Room tax revenue fell to $1.8 million and then to $1.7 million. The tourism development fund was cut 7 percent in 2009.
Plans to rebuild the downtown Regency Hotel fell through due to lack of financing, and the Tiger Hotel has been unable to get financial backing for its renovation even with a tax break from the city that made the project more attractive to investors.
The occupancy rate is an average; although some hotels were more than half full during the year, some were “running in the 30s, and some may be running in the 20s,” Steiner said during an interview early in the summer.
Still, as local consultant Ken Wilhelm pointed out, no hotels had to close, face foreclosure or sell assets at an auction.
And several of the city’s hotels maintained their renovation schedules.
“You have to do it to keep the franchise, and it’s just good business practice,” Steiner said. “If you can manage to do it with cash flow or borrow the money to do it, you have to stay competitive. When property starts to get worn, you can lose meetings business, transient business and corporate business.”
The problem, she added, is that during the recession hotels had to cut room rates to stay competitive, which reduces revenue and makes it harder to finance a renovation and maintain staffing levels.
“You might lose customers because, for example, the 9 o’clock call for an extra pillow doesn’t get answered or it took 45 minutes to answer,” Steiner said.
But the Drury Inn across from the Columbia Mall, America’s Best Value Inn on north Providence Road and several other hotels invested in large-scale renovations. Baymont Inn took over the Holiday Inn Express and upgraded.
The Holiday Inn franchise began phasing out the Holiday Inn Select moniker, and the Holiday Inn Select across from the Columbia Mall had the choice of upgrading to a Crowne Plaza or revert to a regular Holiday Inn. The owners chose the latter and changed their signage.
In another development this year, the Best Western Columbia Inn was sold by Hospitality Real Estate Counselors to Dev Inc., a Missouri company, but will continue as a Best Western franchise.
As the market rebounds, Regency is again seeking financing to rebuild and asking for Tax Increment Financing.
And Holiday Inn at Lake of the Woods, managed by Trisha Hill, opened on Aug. 12. 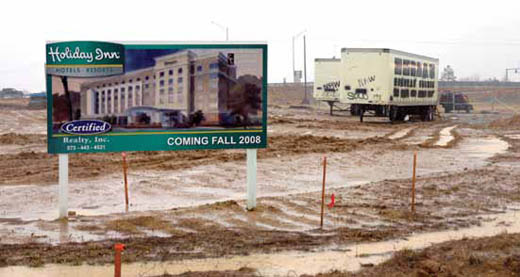 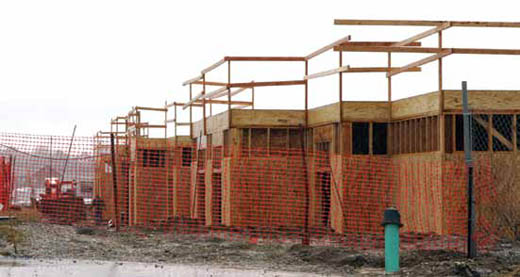