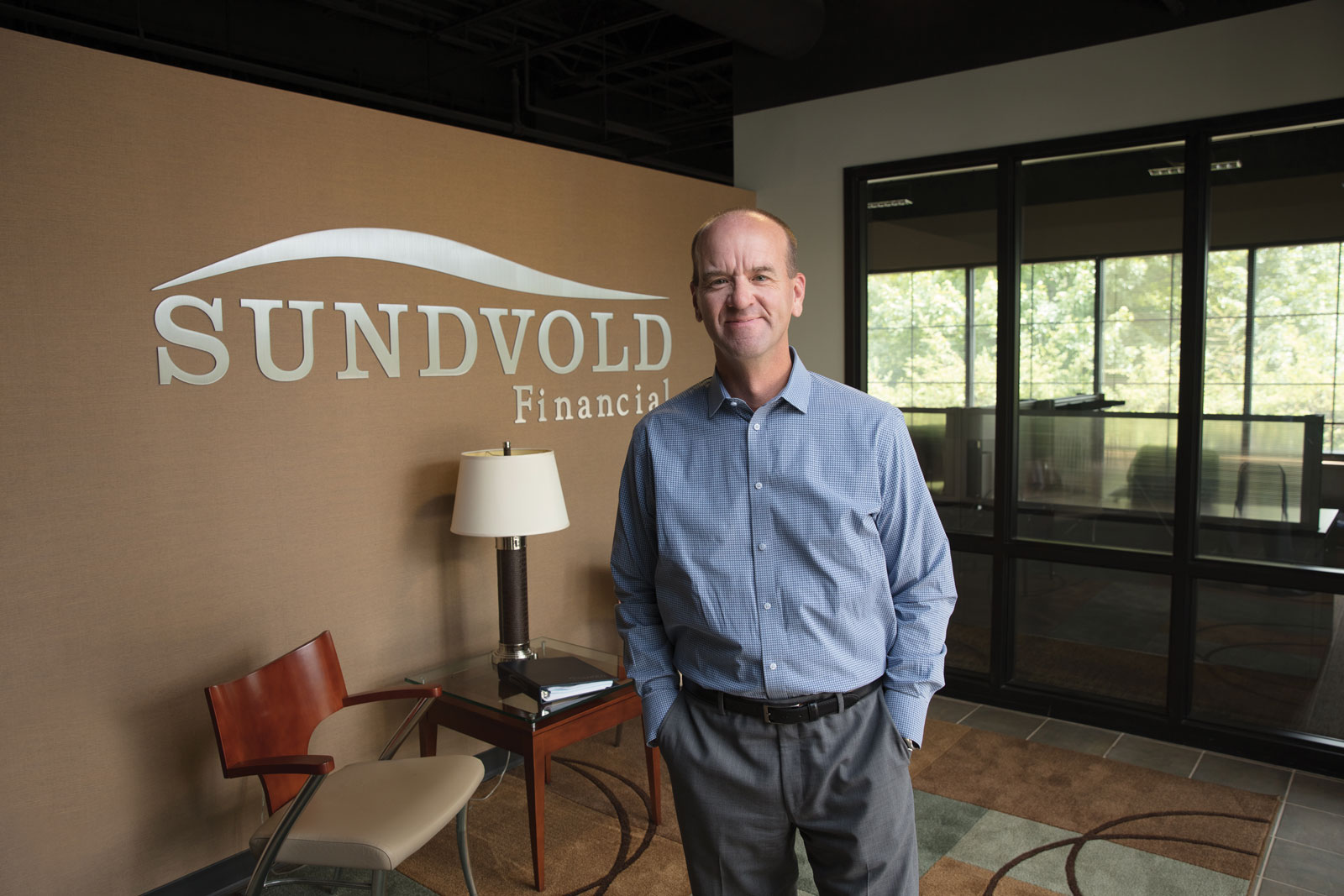 Don’t call it a comeback, but after a 12-year stint in the banking industry, Eric Morrison has returned to Sundvold Financial. His return comes with a new title and host of responsibilities, as he is now president of the employee benefits advisory firm.

Sundvold Financial was founded in 1997 by former MU All-American and NBA veteran, Jon Sundvold. The firm’s mission is, “Helping high net worth individuals, corporations, and foundations reach their financial goals.” The company helps clients achieve this through what Eric describes as a “very proactive process of reviewing investment options and of trying to visit individually with people to try to understand their risk tolerances, their experience with financial planning and investments.”

Eric goes on to describe how each client is consulted and advised individually because, “So much of it is based on personal interaction. Not one thing is the right thing for everyone. There’s a suitability that we have to determine with all those companies we work with as well as the individuals.”

Sundvold Financial has three divisions within it. The 401(k) management division, which manages assets for companies’ 401(k) plans and educates participants on what those plans provide; the group health benefits division, and the personal financial planning division.

Eric joins an experienced and tenured team of roughly 10-15 employees. The unit is close-knit, and it shares the goal of top-tier client service, an objective that Eric believes is the catalyst for the team and brand’s success.

Eric graduated from MU with a degree in Communication in 1998. He extended his time as a Tiger through his first job with the university’s athletics fundraising and administration department. Over the course of nine years, Eric worked in various positions with the Tiger Scholarship Fund, including suite operations and facilities & external operations.

In August 2007, Eric began his first stint at Sundvold Financial as an investment advisor. After a little over three years in that position, he transitioned into the banking industry as the vice president of business development at Providence Bank in December 2010. He ascended to the position of Senior Vice President & Columbia Market President in April 2015 before being named the regional community bank president at First Mid Bank & Trust in 2021.

Eric attributes his reasons for returning to Sundvold to “timing,” or rather “time of life.” He had nothing but positive things to say when reflecting on his time at First Mid Bank and Trust, saying, “I certainly appreciated the way they [First Mid Bank and Trust] treated my family and the COMO team. They were great people to work with and for.”

Still, Eric was eager to rejoin Sundvold in a leadership role and work with Jon once again. “My familiarity with Jon and his business and realizing the value of representing his firm really drew me in. Also, the opportunity to work in the world of small business was an exciting challenge I wanted to take on. I love that in a small business, everybody has a hand in everything all the time”.

Though the friendship and professional relationship between Jon and Eric began while Eric worked at MU, they did meet once before; and Eric is fairly positive Jon has no idea. Eric remembers first meeting Jon when he attended Norm Stewart’s basketball camp in 1990. Jon was there with other former MU players who returned to support the camp. They did a shooting drill together, and Eric walked away with a signed pair of basketball shoes, neither party aware of how their path’s would align in the future.

Eric feels that the experience he gained in the banking industry will be very beneficial in his new role. There, he had the opportunity to work closely with a variety of different businesses, belonging to numerous industries and of all sizes, giving him a broad perspective and behind-the-scenes look of what it’s really like. From that, he learned that there are lots of ways to “run the railroad,” or manage the complex operations of a business.

He remembers the important lessons he learned from a former boss in banking who was at one time a former business owner. “Because of his past experiences, my former boss was great at connecting with business owners because he could say ‘I’ve had the Thursday night sweats when Friday is payday.’” From him, Eric learned more about understanding and relating to people.

During his time at the bank, Eric was also able to become involved in the community in various ways, including joining the Job Point board in 2015. Job Point is “Missouri’s premier employment center and Community Development Corporation.” The organization helps prepare individuals to enter the workforce and connects people with jobs by providing career planning and job placement services. Just last year, Eric won the 2021 Impact COMO Award for “Most Impactful Board Member” for his contributions to Job Point.

This October, Sundvold will celebrate 25 years of business. When reflecting on the firm’s journey so far, Eric gave credit to COMO’s community.