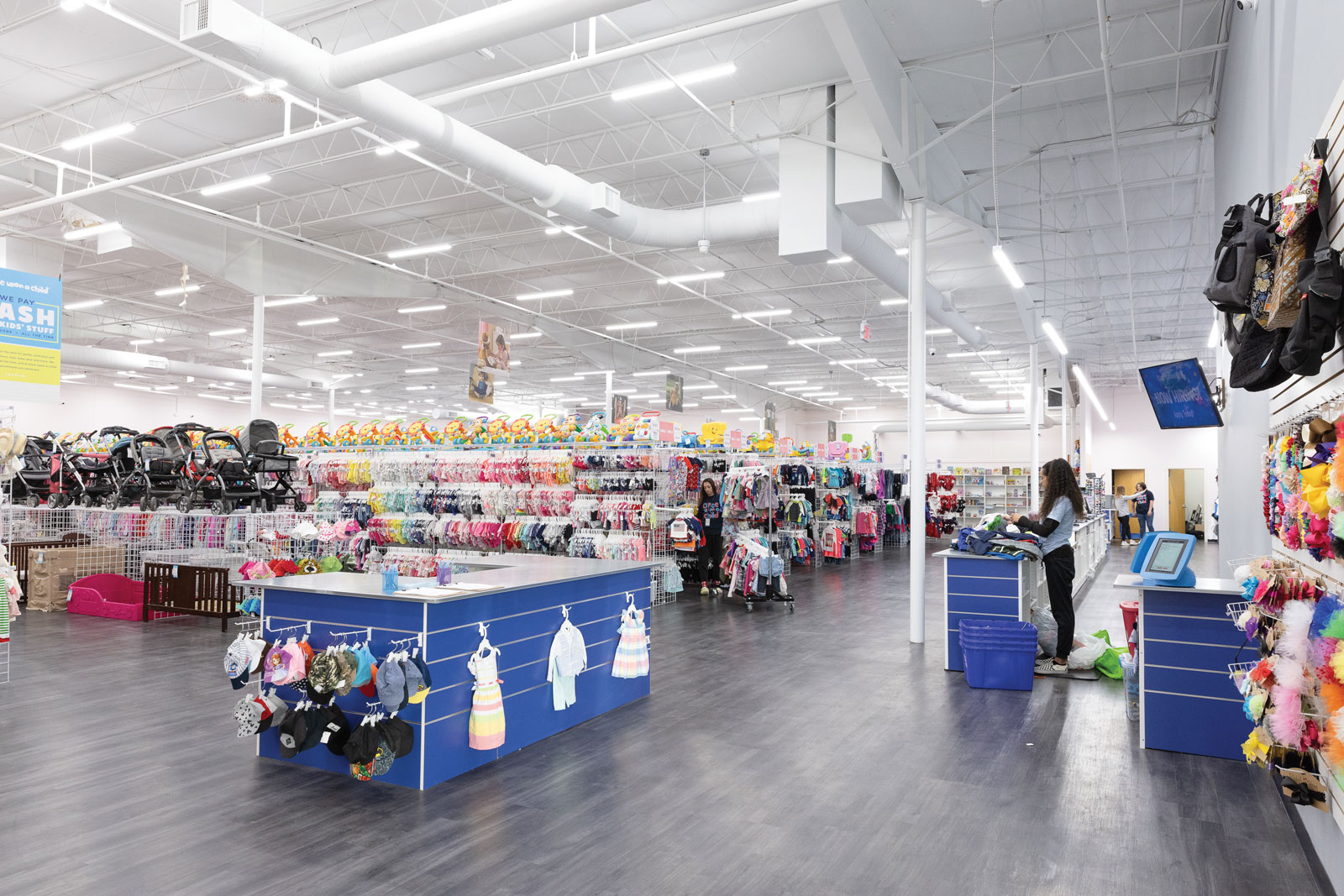 Children’s retail-resale franchise finds a new storefront it can grow into.

It’s no mystery that raising a child is expensive; to the point that some people feel they should forgo having children for that reason alone. Children’s retail items are already costly, but when you factor in how quickly children outgrow these items and multiply those costs by the number of children in any given household, the financial toll can quickly add up. That’s where Once Upon A Child comes in to help.

Once Upon A Child is a children’s retail-resale franchise that buys and sells children’s clothes from preemie-sized to youth 18-20 as well as shoes, toys, and equipment. The store allows families to save money by purchasing quality clothing and merchandise at an average of 60-70% off retail and put money back in their pockets by reselling their gently used children’s items. The typical price point for clothing is $1.50-4.50, which store manager, Christina Kyle, and manager-in-training, Erin Zumwalt, say they often get comments about from customers. “We can’t tell you how many times people have told us going to a traditional retail store would only allow them to buy one thing, but with us, they can buy 10”.

Purchasing children’s items, especially clothing, that are resale has a positive impact on the environment as well as on individual wallets. Fast fashion (i.e., when businesses in the clothing industry focus on rapidly producing high volumes of clothing that replicate high fashion designs at a low cost) is a dangerous trend that has taken over. Businesses have to cut corners to create such inexpensive styles at high volumes and frequencies, and they do so by using low-quality materials and often times child labor.

As a result of fast fashion, according to Earth.org, the industry consumes more carbon dioxide than aviation and shipping combined. The website also states that 92 million tons of clothes-related waste are discarded every year and that more than $500 billion are lost every year due to the lack of recycling and clothing utilization. Shopping at resale stores such as Once Upon A Child is a more sustainable choice for consumers while giving new life to gently used items. As a franchise, Once Upon a Child is proud to report that it has kept “over 800 million children’s items out of landfills since 1993.”

With more than 380 locations in the U.S. and Canada, Once Upon A Child is North America’s top children’s resale franchise, though each store is independent and locally owned and operated. According to Christina, Once Upon A Child has paid almost $4 million directly to customers since opening in the fall of 2015. That money allows families to invest in other things they want/need, circling right back into our local economy.

Christina has been there since the beginning, working her way up from being a entry-level employee to becoming the store manager in 2020. She watched firsthand as the store grew in popularity, and by the time she took over as store manager, the store had outgrown the original space on Broadway.

Once Upon A Child team has been planning to move for a few years, but things did not officially set in motion until 2021. This past January, the store’s dedicated staff moved more than 3,000 bins of merchandise in just four days. The new space on Nifong is 15,000 square feet, three times bigger than their previous location.

“The space itself is huge and bright; there’s just so much more room. In the last space, the aisles were getting pretty cramped. Sale days are much more bearable here, and being in a new part of Columbia has brought in tons of people who never knew we existed before!” Christina says.

Now that they have the bright shiny space, they’re looking to fill it! While equipment items and toys are in their highest demand, there is a need for all children’s items.