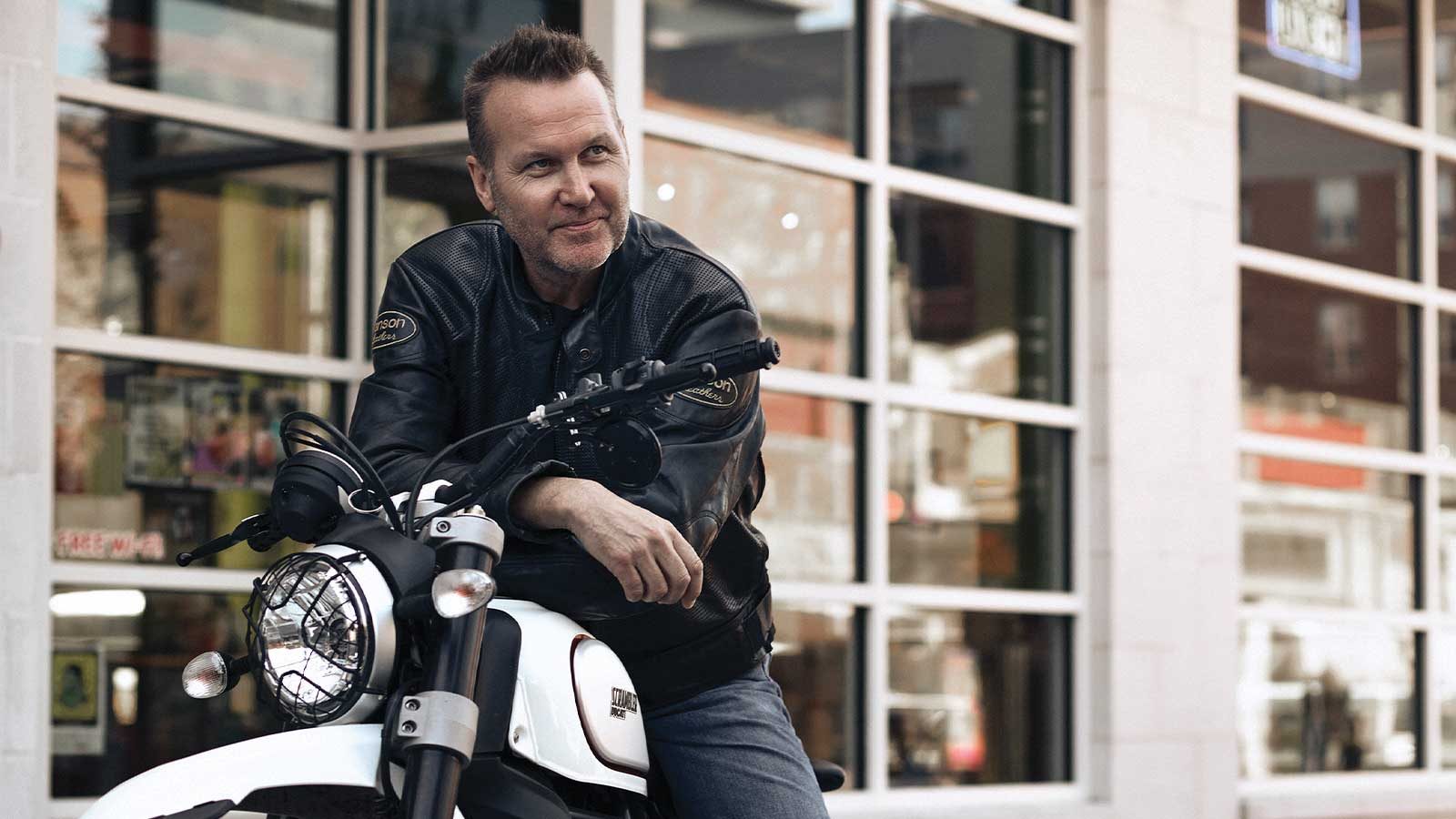 What Do We Do?

Bernie McDonald and Paul Tuckley step outside their comfort zones to embrace adventure.

How do you define adventure?

Meet two Columbia men who have their own unique definitions of what it means to be adventurous. For Bernie McDonald, dedicated to walking in all 50 states, adventure is a mindset of being open to whatever experiences come up. For Paul Tuckley, adventure is achieved when you put yourself in a position where things can go wrong — and are prepared to accept that.

For both men, adventure means focusing on what they can control and doing it well.

Bernie McDonald is on a journey. He had toyed with the idea of the Great American Road Trip for some time — except he didn’t own a car. After a stint living in England and the breakup of his marriage, the Columbia native found himself back stateside in 2012, this time in Portland, Maine. In Portland, he rediscovered yoga and was so invigorated and challenged by the practice that he decided to train to become a yoga teacher himself.

Then he heard an episode of This American Life called “Hit the Road” about a man walking across the country. It changed everything for Bernie: He would walk.
Bernie’s own goal was to explore and see the country while learning more about yoga along the way. “I liked that I had a theme to keep me going,” he says. “I could explore different yoga places as I go to learn and continue my education.”

With the support from friends who gave him the courage to go for it, Bernie left Portland in August 2013 and began walking down the Eastern seaboard. His average walk was 15 miles a day; he avoided interstates and highways and would instead go out of his way to find a better, safer side route. He typically stayed in each place about a night, visiting yoga studios and staying with people he met at classes or knew through connections with friends.

By Thanksgiving, though, his body told him he needed to take a break. After walking 800 miles, his shin began to swell, and he realized the backpack he was carrying was too heavy for his journey. He returned to Portland at first, but came back to Columbia, where his family still lives, in 2014. He began teaching yoga locally and started to feel whole again.

100 Miles in Each State
After giving his body time to rest, Bernie came up with a new plan: to walk 100 miles in every state. “It’s a lifetime goal, but I’d like to do it sooner rather than later,” he says.

He began walking again, this time with a new goal of using mass transit, taking Amtrak trains and Greyhound buses to get him to different states. He plans trips based on the route and is mindful of the time of year, weather, and seasons — avoiding the East Coast, for example, during hurricane season. By 2016, he had made it from coast to coast. In 2017, he took another trip, and he has currently visited 28 states.

Bernie writes more about his travels on his website, berndogyoga.org, with the ultimate goal of writing a book about his experiences.

On one memorable trip, he caught the Amtrak train through northern Montana, where it stopped half a mile from the entrance to Glacier National Park. He also walked along a river gorge in an abandoned railroad town in West Virginia to catch a train that only stops there every other day. Besides the interesting moments, he’s experienced lows along the way — in addition to the shin injury, he talks of the challenges with bus transportation and the isolation of traveling alone.

“Loneliness is the biggest thing you deal with doing adventurous stuff on your own,” Bernie says. “It’s exciting because you have the end goal and the experience, but doing it alone takes much more mental energy. Some days, it’s a big ask.”

And what do his friends and family think about his plan? “People are generally scared or frightened for me, or don’t want me to be away that much. They’re excited, but miss me,” he says. “But my mom has gotten much better about not worrying.”

Bernie continues his yoga education at each stop and enjoys learning about our country, its cities, and its natural beauty at each destination. “I’ve learned that I can be happy anywhere,” he says.

Bernie advises anyone else looking to begin their own adventure not to box themselves in. “For me, hearing that podcast made me realize that anything is possible,” he says. “Whatever your interest is, you can find something. Find your tribe of people who believe in it.”

Paul Tuckley has adventure in his DNA. He grew up playing rugby in his native England until, after a few injuries, he decided to find something new that was adventurous and exciting.

He started mountain biking, and after discovering the thrill of big mountains, started downhill mountain biking. He became heavily involved in downhill, riding primarily in Colorado and through some of the world championship courses. After getting “sort of banged up,” he says, he started looking for something new again. This time, adventure came in the form of motorcycles.

“It escalates,” Paul says. “You get good at something in your own mind, and then you associate with people who are better than you and you get better.”

“It was a casual, recreational way of riding my bike fast. I started enjoying it tremendously, and one thing led to another,” Paul says. He started racing about five years ago and soon became deeply involved.

Most of his time is now spent racing on major circuits around the U.S., often with a group of friends who race in organizations like the American Sportbike Racing Association and the Championship Cup Series. He recently returned from racing at Daytona.

“My goal is to constantly get better at what I choose to do,” Paul says. “It’s difficult to do that because it’s very demanding.”

Finding the Flow
But it’s that demanding part of racing that keeps him motivated. He describes trying to reach the “flow state,” a psychological concept where your task at hand completely absorbs your concentration and focus.

“If the challenge outweighs your expertise, you become nervous and anxious. If your expertise outweighs the challenge, you become bored,” Paul says. “And there’s a space in between, the flow state, which is where you get to a point where you go, ‘This is who I am.’ I like that feeling of pushing the envelope till the point where I’m at the limits of my expertise, but then you have to keep on finding greater challenges.”

It’s an addictive feeling that keeps him challenged. “The mind does very clever things with you when it’s being pushed, when you’re pushing your mind and body to do things that are outside the normal bounds,” he says.

Paul realizes that friends and family, from their perspective, might be concerned because there are consequences to great speed. At the same time, they know how important racing is to him. “I think they know it’s definitive for me. If I didn’t do it, I’d be unhappy,” he says.

He also describes a racing environment that is highly regulated, one where you constantly have to prove your abilities and where it takes an enormous amount of preparation and skill to get from level A to level B. Equipment is also regulated, with approved helmets and air bag suits, and bikes go through technical inspections prior to each event.

During a race, Paul describes the moment of launch as “silent and serene and extremely personal.” Then, during the actual race, the action is also very personal. “When you put your helmet on, you have thoughts you don’t ordinarily have, but you’re always thinking about the next moment,” he says.

While racing may be thought of as a male-dominated sport, Paul is quick to point out that it’s a tough sport that includes women racers as well. “Women are seen as equal participants, and there are female world-class racers who have won championships in racing,” he says.

After all, you don’t really know who is racing until the helmets are off. “I can race against a 16-year-old kid or a woman and I don’t know,” he says. “One of the wonderful things about racing is the participation is equal on every level. The esteem we hold people in is based on their talent, ability, and attitude.”

As for his next adventure, Paul hopes to return to Daytona, this time with the goal of a first-place win. “In motorcycle racing, you’re constantly stretching yourself,” he says. “I really want a first place at Daytona. I need to win one, so that drives me even harder.”