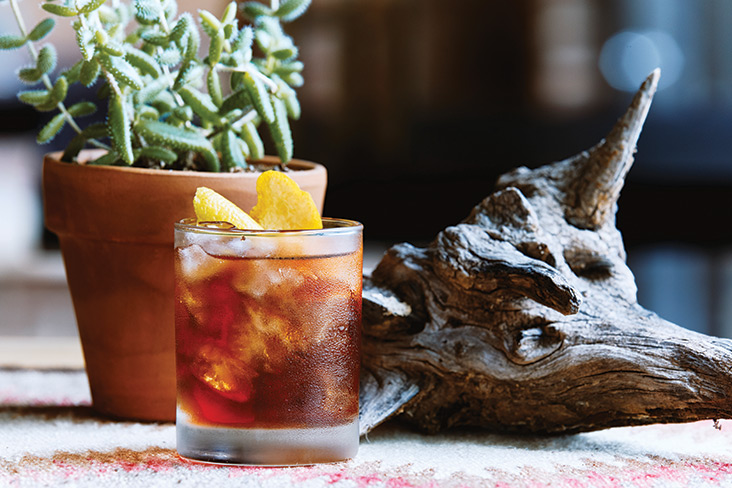 The anticipated brick-and-mortar location of Lindsey Spratt’s creation, Boss Taco, opened its doors in downtown Columbia only a few months ago. While tacos and avocado fries may bring the people in, the bar will compel them to stay.

The corner hangout brings up feelings similar to the awe one might have watching an eclectic bohemian interior designer pull together elements from all styles to create one cohesive space.

The noise level is civilized without the feeling of seclusion. You might even hear a trendy indie band playing on the speakers overhead.

At the bar, you’ll neighbor small groups of succulents and cacti, foreshadowing the tequila- and rum-focused cocktail menu. Of course, there are various wines and beers offered, but where else in Columbia do you find the level of attention to rum that Boss Taco gives?

A bar for the people, Boss Taco evokes an attitude of eccentric calm. Boss Taco’s bar manager, Sean Curd, pours that attitude in a glass.

The Man Behind the Bar
Sean is a tall, bald, bearded man with a personality balancing his introverted nature and outward friendliness. He’s hard to miss.

Sean fell into bartending during his graduate studies in literature at MU. He found a mentor in 44 Canteen’s Aaron Brown during his first years of bartending. Aaron opened his eyes to the creative world of spirits. Sean fell hard for the culture and history of bartending, and his boozy love affair enticed Sean to stay in Columbia after graduation.

What could be more literary-romantic then hearing the stories of others while passing booze across a bar?

“I really love tailoring an experience for a specific person,” says Sean. “It’s fun to have like an hour or hour and a half with these people. You get to know them and get into their lives.”

Sean worked on the cocktail programming at Sycamore and Top Ten Wines before transitioning to Boss Taco. With four years of bartending experience behind him, Sean has taken on the challenge of managing a bar.

Columbia has shown its love for cocktail culture. They’re ready for the second round. Sean has taken his creative freedom to work, harmonizing the needs of the bar while ushering in new ideas and trends to Columbia.

“You’re sort of always playing around with recipes in your head. During drink shifts, we sort of go over things when things start dying down,” says Sean. “That’s when the creative juices are flowing — you start seeing things that you want to start melding together.”

For Boss Taco’s spring cocktail menu, Sean took inspiration from the resurgence of tiki bars and tiki-themed drinks. The result is a menu with boozy, stern rum drinks, a space unoccupied by any other bar in Columbia.

I’ll Take Another
“Our drinks are tailored to be simple, but elegant,” says Sean. “We want to be simple enough where we can have conversations with people. We want to have less stress on our bartenders, too. We’re not trying to reinvent the wheel here.”

Sean has streamlined the margarita process as well — Boss Taco’s variation on the drink was curated to be cranked out quickly with quality ingredients. Sean uses a blanco tequila, fresh lime juice, agave nectar, Cointreau, and a little bit of salt to create a perfectly balanced, multi-note margarita.

Their traditional margarita has a smoky twin worth the second round. The El Jefe margarita (pictured above) has an addition of mezcal and ancho reyes verde for a taste bud kick.

A crowd pleaser, daiquiris are celebrated on the cocktail program, coming in banana and pineapple varieties. However, you won’t be served the familiar frozen slush associated with the drink.

“I love banana daiquiris. You go some places and they make you this frozen, disgusting mixture that is like a big slushy,” says Sean. “We wanted to play off of the classic daiquiri cocktail and play into the banana flavor, so we use a banana liquor. It ups the alcohol content and gives a nice, fresh banana flavor without tasting like banana Laffy Taffy.”

While margaritas may be the dominant player, Boss Taco’s Hell or High Water cocktail (pictured below) is their top cocktail. The drink’s standout ingredient is a fig and black pepper bourbon.

“It’s a simple, elegant cocktail with a lot of great flavors in there,” Sean says about the drink. “It kind of tastes like the great American novel.”

Crafting an Educated Drinker
A repeated spirit on Boss Taco’s menu is mezcal. Mezcal is an agave-derived spirit often compared to tequila, though mezcal is bolder, wilder, and a touch smoky, with a wide range of varieties.

Boss Taco serves mezcal in a traditional way — in two shallow clay cups called jicarita. One cup is full of a mezcal for sipping; the other hosts a small orange wedge to bite into between sips. It’s a presentation that could lead a confused patron to shoot the contents instead of sip.

The Boss Taco bar-goers are as diverse as their surroundings, bringing in drinkers of every experience level. Sean is ready to share his cocktail affections with the world and use his casual tone to ease curious drinkers into trying more traditional spirits.

“Go places where you’re comfortable talking to the bartender. Those are the best bars. My favorite bars are a place where I can sit and talk with the bartender,” says Sean. “That’s the biggest thing to me. I think I would get bored if I didn’t get to talk to people about cocktails. I couldn’t just sling rum and Cokes and pour beers, you know?”