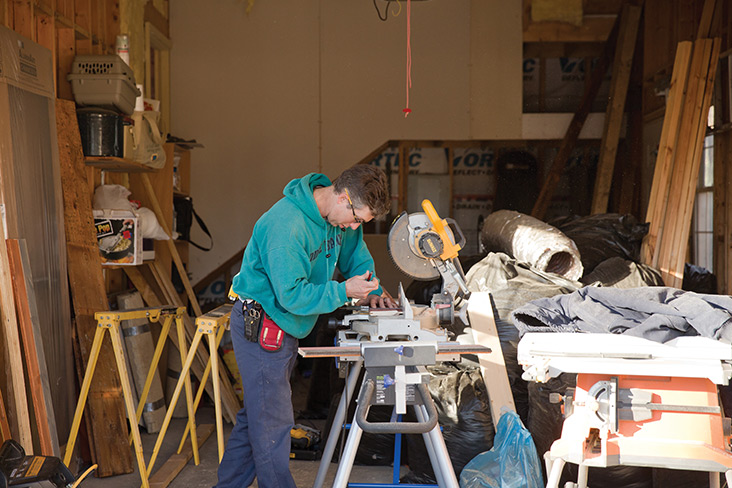 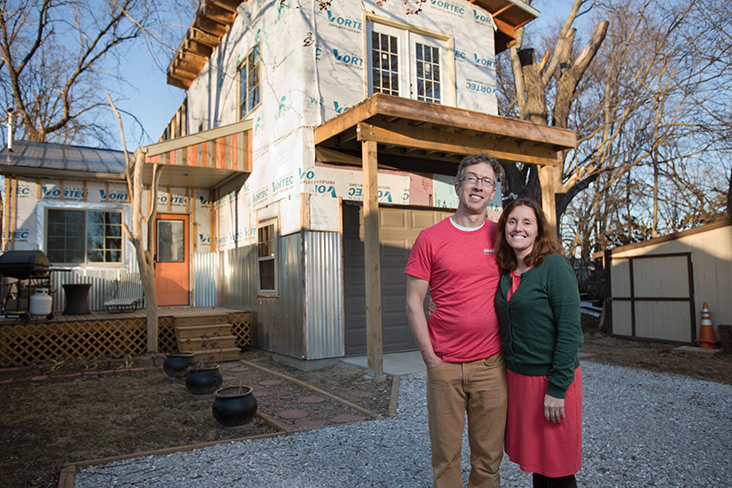 Sometimes you hear a story that grabs you — someone does something heroic and it inspires you to try something heroic too. That’s what happened when we heard about Tony and Leslie Rigdon’s plan to triple the size of their home using cash. Who does that? They’re modern-day financial superheroes.
We first shared their story in the April/May issue of COMO Living magazine, and it was one of our most read online stories of 2017. I guess it inspired our readers as much as it inspired us. We’ve followed them the past year and are excited to give you an update on their progress. After all, who couldn’t use a little bit of inspiration these days?
While most couples would head to the bank for a loan, Tony and Leslie Rigdon chose to renovate their home with cash.
When Tony first started house hunting in 2008, his realtor showed him several properties, but it was a 1940s fixer-upper that caught his eye. The 540-square-foot home, located at 213 W. Forest Ave., featured one bedroom, a small kitchen, a living room, and a bathroom for a mere $20,000.
“The house was in shambles when I bought it,” says Tony, who performs energy audits for Chapman Heating and Cooling. “I liked that it was set farther off the street and was smaller in size. It also looked good on the outside, which allowed me to focus on working on the inside.”
Initially, the house needed a complete gutting and remodeling, so for three months, Tony went without a fully furnished kitchen or shower. He kept all his belongings in a rented utility trailer. “I slept on an air mattress on the bedroom floor and showered at the gym,” he says, laughing at the memory.
The first round of renovations continued until 2012. Then Tony met his wife, Leslie, now a volunteer coordinator with Heart of Missouri CASA, and decided to upgrade the space from 540 square feet to 1,400 square feet. After the couple married, in 2013, the additional renovations began.
“The house addition could have been completed quicker if we were willing to take on debt,” says Leslie. “Instead, we’ve done the project as we’ve had the money.”

Dust, Sweat, and Lots of Nails

“What makes this project unique is that we’re encompassing the current structure with the new additions,” says Leslie. “It’s highly efficient, and all the ideas and plans are Tony’s.”
The current renovation includes expanding the living room, adding a porch, creating a second story with a master bedroom and bath, and adding an additional bedroom onto the second floor. During this process, the property has taken the shape of a warm, welcoming tiny-house style living space surrounded by a shell of construction projects.


All renovations have been DIY except for the concrete slab for the garage. And aside from two occasions when a few friends came over to help build walls, all the labor has been Tony and Leslie’s.
The couple has no specialized training in construction. Tony credits his knowledge to construction projects he helped on during high school mission trips, self-guided home schooling as a high school student, YouTube, and at least 20 books.
“I’ve done my share of helping,” says Leslie, “taking out and nailing in nails, removing old siding, putting up foam board insulation, carrying bags of concrete, staining, and digging up dirt for the front walk area. But most of all, I enjoy being Tony’s encourager.”
Tony owns most of the tools and equipment, but some items have been purchased, rented, or borrowed from friends. Some of the materials used for the renovations were purchased, mostly at Menards, but many others have been salvaged from the original structure or elsewhere.
“I took apart the roof and reused as much of the wood as I could,” says Tony. “I remember Leslie asking where the two-by-fours in the back of my truck came from. I was driving by Mizzou and saw them in a dumpster, so I grabbed them.”
“It’s been a major accomplishment for us to cash-flow it,” says Leslie. “There is a certain peace that comes with not having debt follow you around. Debt can affect your marriage, it can affect ou personally and professionally. Why not live free of this debt and not have another burden to carry through life?”
To date, the Rigdon’s have spent $39,414.68 on renovations. They estimate $10,000 more to complete the project. When all is said and done, they estimate the changes will more than triple the value of their home.

Tony’s occupation has inspired some eco-friendly ideas for the space. The finished home will be well-insulated and feature a wood-burning stove. They eventually plan on installing solar panels and making the house net-zero, meaning it makes as much energy as it uses.
Since this time last year, the Rigdons have upgraded their electrical service from 100 amps to 200 amps, gotten rid of their natural gas service, installed electrical wiring throughout the addition, and completed some siding. They’ve also taken down the original exterior wall in the living room, opened it up to the new space, and hung all the drywall throughout the addition. They’re currently working on mudding and taping, and upgrading their HVAC system.
The project has come with some challenges, including waking up in the middle of the night with water coming through the ceiling. Since the couple can only work on the home during evenings and weekends, the shorter daylight hours have made it difficult.

“It would have been easier to build something new than it’s been to build around an existing structure,” Tony says. “The way zoning and inspection in the city is set up is conducive to building new structures. They’re used to working with contractors rather than DIY-ers.”
Overall, the two-story house serves as a conversation topic and centerpiece of sorts amid the street’s row of mostly single-story abodes.
“Part of us wanting to do this project is investing in our neighborhood and inspiring others to care for and improve their properties,” Leslie says. “Having conversations with the neighbors about the project has created relationships we may not have had otherwise.”
Since both Tony and Leslie work full-time, finding the necessary hours to work on their home has been a challenge. But after 10 years of blood, sweat, and tears, the renovations will be complete in July. It’ll be just in time for them to tackle another addition — only this one will have tiny hands and feet. Good thing they have the extra space.