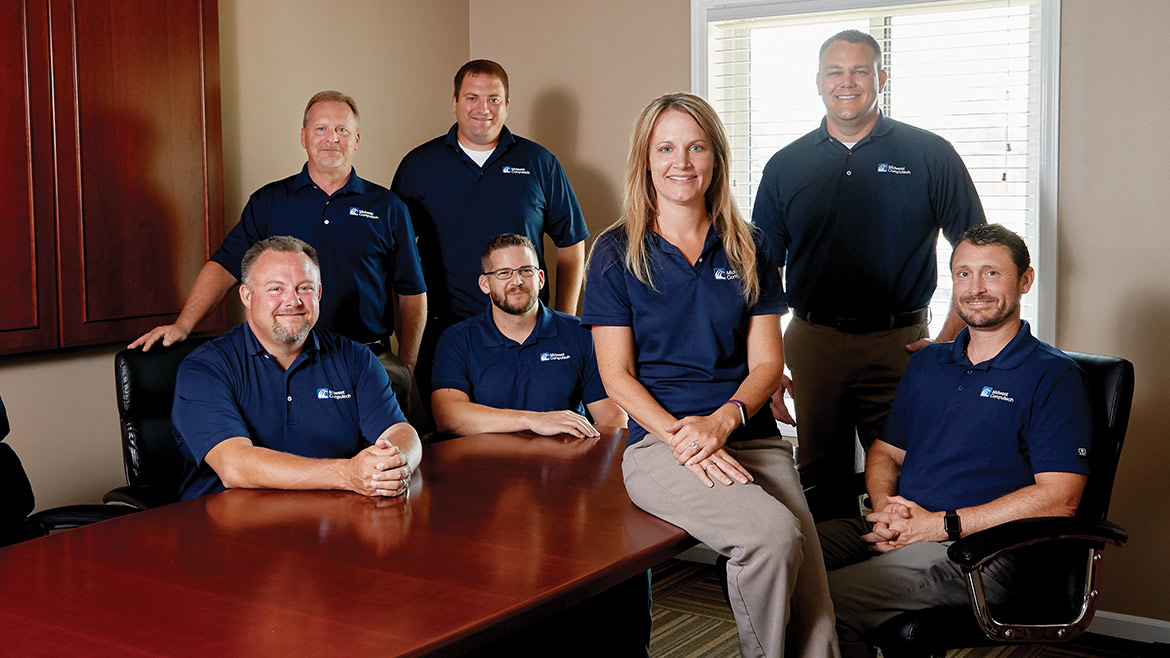 Home computers have come a long way since the old green screens that allowed you to do little more than type a few words and play Pong. Eventually, you could also play Wheel of Fortune, but only until you memorized all nine of the word puzzles that your eight-inch floppy disk could hold.

Midwest Computech has been around since those days, before they were even in the computer business. The company, which celebrates its 35th anniversary this year, got its start in 1982 selling typewriters in Sedalia, mostly to the Sedalia 200 School District.

Back then, the company was known as Young’s Typewriters. The company would experience its first name change when it was bought out by Jeff Leeman in 1987 and became JL Computer Technologies. It was around this time the company began assembling and selling their own computers to school districts and offering on-site IT support. Greg Miller, who had previously worked as the technology coordinator for one of the school districts supported by JL Computer Technologies, joined in 1999. And just a couple of years later, in 2001, David Nivens joined the company.

Nivens had been the technology coordinator for Concordia and Higginsville school districts. Nivens and Miller went on to buy the company in 2004 and changed the name to Midwest Computech. By this time, as you might guess, they were out of the typewriter business. Although, Nivens says with a laugh, even as late as the early 2000s they would get the occasional request from a previous customer from years prior asking for help fixing a typewriter.

At this time, Midwest Computech was building their own computers, but they wouldn’t be doing that for much longer. They were starting to specialize more and more in IT support for their customers and learned to do everything from maintenance work on servers to getting into the walls and running connection fiber. In addition to their Sedalia office, which Miller runs, they also opened an office in Columbia, which would move around a couple of times before settling at their current location on Bernadette Drive, close to Columbia Mall. And they weren’t just offering their services to schools any more, although they still do service approximately 50 districts, but to businesses as well.

In 2008, the company started a data center for their customers to store information. Nivens says this was a great step forward for Midwest Computech, eventually allowing them to top 50 employees. Nivens is also proud that, starting seven or eight years ago, this growth has also allowed the company to do some charitable things for the community, such as offer free laptops to kids going to college who might not be able to afford their own computers.

As Midwest Computech celebrates their 35th year in business, the company seems to be settling into a practiced method of success. Midwest Computech intentionally works to maintain partnerships in their industry. Employees from engineers to service representatives work to maintain as many certifications with Apple and Microsoft programs as they can. When someone from Midwest Computech calls someone from Microsoft or Apple, they are speaking directly to higher level representatives at main company offices (not the lower-level 1-800-operators with whom the rest of us end up speaking). They’ve also sought to distinguish themselves through an emphasis on security, developing a closely monitored relationship with a firewall partner to ensure that customers can keep their data safe.

Nivens says that one of the many things that makes him proud of his company is being recognized with local, community-focused accolades. That being said, it’s also nice to be recognized with a Blue Ribbon Small Business Award by the United States Chamber of Commerce — six consecutive times. Nivens is quick to point out that it isn’t having accolades to mount on your wall that matters, but what those awards mean.

The United States Chamber of Commerce, for example, looks at a number of things when selecting the award recipient. While business growth is one of them, they also look at things like community involvement and various other factors that Nivens finds meaningful and reflective of a business being led by individuals who don’t define success strictly in dollars.

Young’s Typewriters starts out by selling typewriters in Sedalia, mostly to the school district.

Jeff Leeman buys the company and adds computer assembly and sales to their product line.

Miller and Nivens buy the company and rename it Midwest Computech.

Midwest Computech earns the first of its six — so far — consecutive Blue Ribbon Awards from the U.S. Chamber of Commerce.