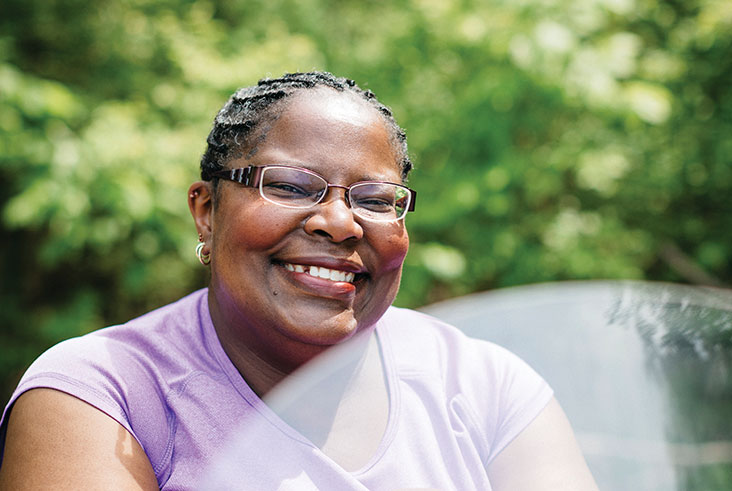 Fun in the Sun

Betty Houston grew up watching her older cousins ride motorcycles. “Guy cousins,” she points out. “I didn’t have any girl cousins that rode. And I thought it was fascinating. I always wanted to ride.” Betty’s mother didn’t want her sons to ride, so Betty didn’t bother to ask if she could. But her desire never left.

In 2009, she says, “I thought, you know, it’s time. So, I went to the Harley dealership to take the class.” She got her license and bought herself a Honda 750 Shadow for her birthday. “They delivered it for me, and after they drove off, I thought, ‘Wow. What was I thinking?’ It’s a big thing.” 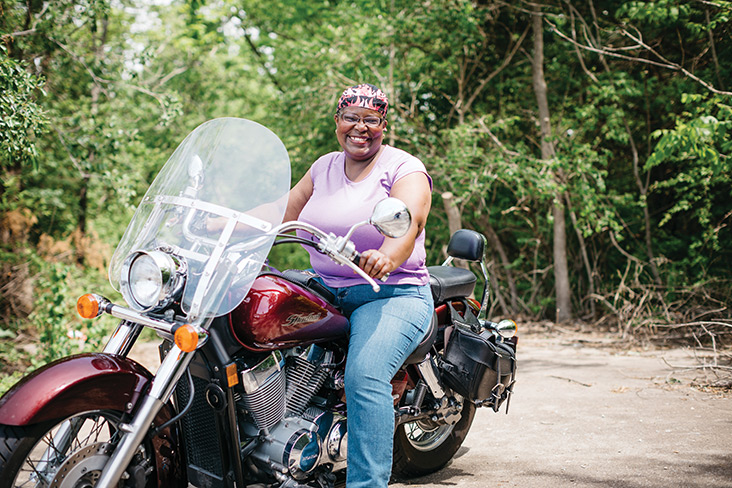 She started slow, riding the Honda up and down her street to get a feel for it — “terrorizing my neighbors,” she says. Her bike doesn’t ride as smoothly in the wind, so she’s careful not to ride on windy days. “I ride for enjoyment. I don’t want to get killed out there. It should be fun, not scary.”

She often rides her motorcycle down I-70 to visit her father in Warrenton, but shorter trips around town are less frequent. “It’s not one of those things where you just walk out the door with your keys and you’re gone. There’s some preparation to it,” like checking tire pressure and oil, and donning chaps and other protective gear for longer rides. The furthest she’s gone in one ride is Lincoln, Nebraska, the first leg of a trip to Idaho. “I have a cousin that lives in Boise, so we took the bikes out and rode around near Boise.”

Betty, a medical assistant at University Hospital, doesn’t know any other women in town who ride, so when she goes on group outings, it’s mostly men, sometimes with their wives behind them. “My older cousin still rides, and he’s in a motorcycle club out of Jeff City, so sometimes I’ll ride with that club and hang out with them,” she says.

Betty says her most memorable group rides are escorting the Honor Flight, a nonprofit group that takes veterans to visit the war memorials in Washington, D.C. Hundreds of motorcyclists meet the returning Honor Flight bus in Kingdom City late at night and lead it back to Columbia. “That is the neatest feeling, when they say, ‘Fire ’em up!’ and all these bikes start.”

Betty has also taken part in a “poker run,” where participants ride their motorcycles from stop to stop, drawing a playing card from a deck at each one. At the end of the route, they see who has the best hand. These rides are usually charity fundraisers. The one Betty went to ended with a picnic. “People who ride motorcycles, if you’re on another motorcycle, it’s instant family,” she says.

For Betty, riding feels like freedom. “I’m not sure I can put it into words. It’s so nice. When I was taking my class, the first time I got on, I was like, ‘Where’s my seatbelt?’ But once I started riding, it was so relaxing. I don’t have a radio, so it’s just me and my thoughts. I sing songs, do a lot of praying and a lot of thinking.”

She says being on the bike helps her connect with the world around her. “The smells — I mean, roadkill’s not good, but if someone’s cutting grass, the flowers, things that you wouldn’t think about when you’re in a car. It’s very relaxing.” Out on the road, with no barriers between you and your surroundings, “You can just look and see everything, and be a part of it.”