Briefly in the News: March

This March marks Missouri Employers Mutual’s 22nd anniversary, and since the end of its first year, it has led the market as Missouri’s largest workers’ compensation insurance provider. And while MEM has seen steady growth in its bottom line, this company of “safety fanatics” seems motivated by something deeper and more personal. The company mantra of “taking care of folks” continually energizes a culture of innovation, compassion, and a drive to keep moving forward.

“Work comp” laws vary from state to state. According to the Missouri Department of Insurance, employers with five or more employees, and all contractors, are required to carry a work comp insurance policy. This type of insurance benefits an employee injured on the job by covering medical costs, lost wages, and permanent disability. It also protects the employer from civil suits brought by the injured employee.

“We were created to solve the affordability and accessibility crisis of work comp in 1995. That’s how we got our start,” says Revee White, director of marketing and communications. She’s only worked at MEM for six months, but she’s already adopted the passion of longtime employees.

In 1993, the Missouri legislature passed a law to create a mutual insurance entity with $5 million in seed funding from the state’s Workers’ Compensation Administration fund. The legislature wanted to increase competition to create more affordable work comp options for small businesses. The result was Missouri Employers Mutual.

“You have to have work comp. It’s like auto insurance,” says Jim Owen, who came on as president and CEO of MEM in 2011 after previously serving the company as an attorney. “If you have to have it, it should be affordable and good. And that’s what MEM is about. We wanted to come in and build something so the people who had to have insurance could get a good product.”

MEM finished 1995 as the largest work comp insurance provider in the state and maintains that status today, with around 16,000 policyholders. It paid back its $5 million startup loan to the state in four years.

MEM still prioritizes policyholders whose premiums are $10,000 or less, but has added larger policyholders, like school districts and police departments, in the last five years. This has helped MEM’s premium revenue nearly double since 2010, from $107 million to $209 million, and at the same time, MEM says the frequency of workplace injuries continues to decrease. Between offices in Columbia, St. Louis, Kansas City, and Springfield, the company expects to grow to around 300 employees by the end of this year.

But Owen is quick to point out that MEM is about much more than insurance: “We’re a safety company that happens to sell insurance.”

“Most companies’ ultimate financial strategy is return on investment, but ours is return on safety, so it’s quite different,” say Tim Jackman, COO, who has been with MEM from the beginning. “The way we measure that is returning more workers home safely to their families every day.” 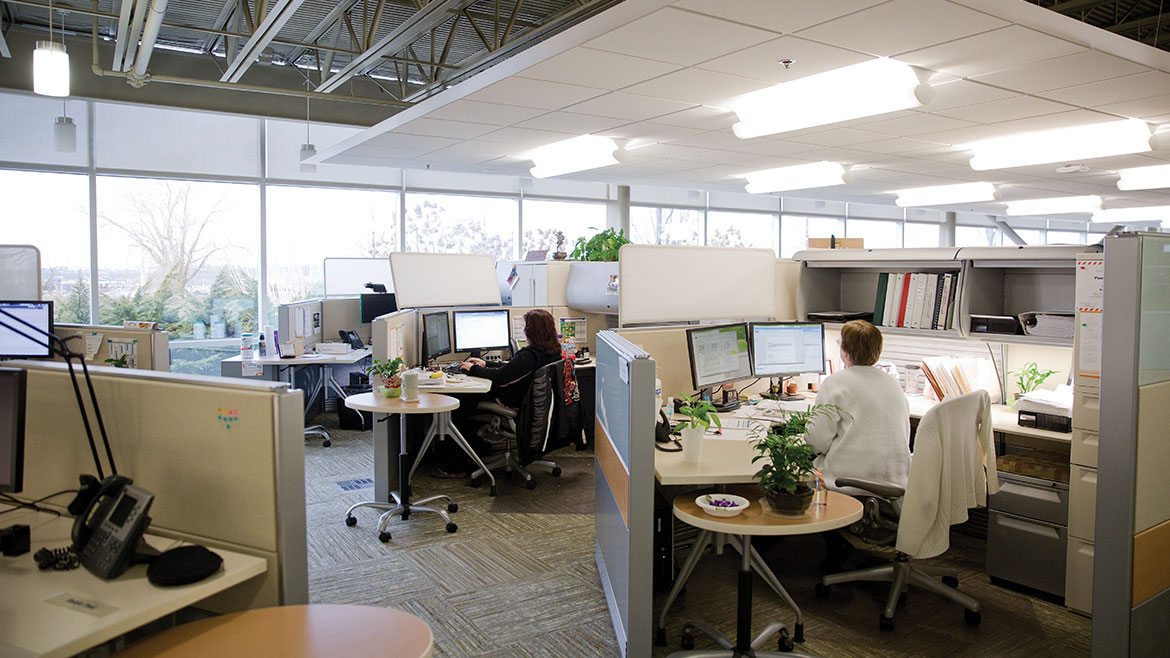 In January 2017, MEM awarded its first safety grants to 17 Missouri businesses, including Columbia’s Woodhaven. The grants offer a one-to-one match of up to $20,000 for policyholder companies who are implementing new safety technology or protocols. The grantees will be required to report their findings, which MEM plans to share with its policyholders and the general public.

MEM plans to award $1 million in safety grants over the next three years and expand the program in the future.
Last year, MEM also funded research by MU’s College of Engineering to test after-market collision avoidance technology devices that can be installed in older cars already on the road. Local OATS passenger vans were used to test the devices, which alert drivers when they follow too close, depart from their lane, or are at risk of a  front-end collision. The study found that three out  of four drivers had improved driving safety with the installed devices.
“Innovation is a core value here,” says White. “We want to explore ‘the art of possible’ and focus in on safety and how technology and innovation can help make workplaces safer.”
In addition to safety grants, MEM offers safety dividends. Policyholders’ workplace efforts and results can earn them up to 25 percent of their premium back.
“How many other insurance companies want your premium to go down?” asks Owen. He says that the safety dividends incentivize workplace safety, which helps decrease injury claims and losses, creating a win-win for both MEM and the policyholder.
“Safety pays,” he says with a smile.

Drive down Keene Street; it’s hard to miss the MEM campus. The 64,000-square-foot property features an enormous skylight above an open-air atrium on the upper level, offering a comfortable, modern flair. Employees can be found walking laps around the atrium as an impromptu track. In the warmer months, employees can get outside and use the actual track that circles the facility, which also includes a small lake.
The building’s sweeping lower level includes a self-service beverage bar and a small sitting area with built-in bookshelves. Most of the work stations are also open-concept, encouraging interaction and collaboration among employees.
“When we talk about taking care of folks, it’s not just external folks — it’s internal as well. We want people to have a healthy work–life balance,” explains Jackman. “If you go back to our vision statement, it talks about safe and healthy workplaces. The ‘healthy’ aspect is something we’ve latched onto more in recent years, and we’re really encouraging that, and that’s why you see people taking breaks and walking around the track.” 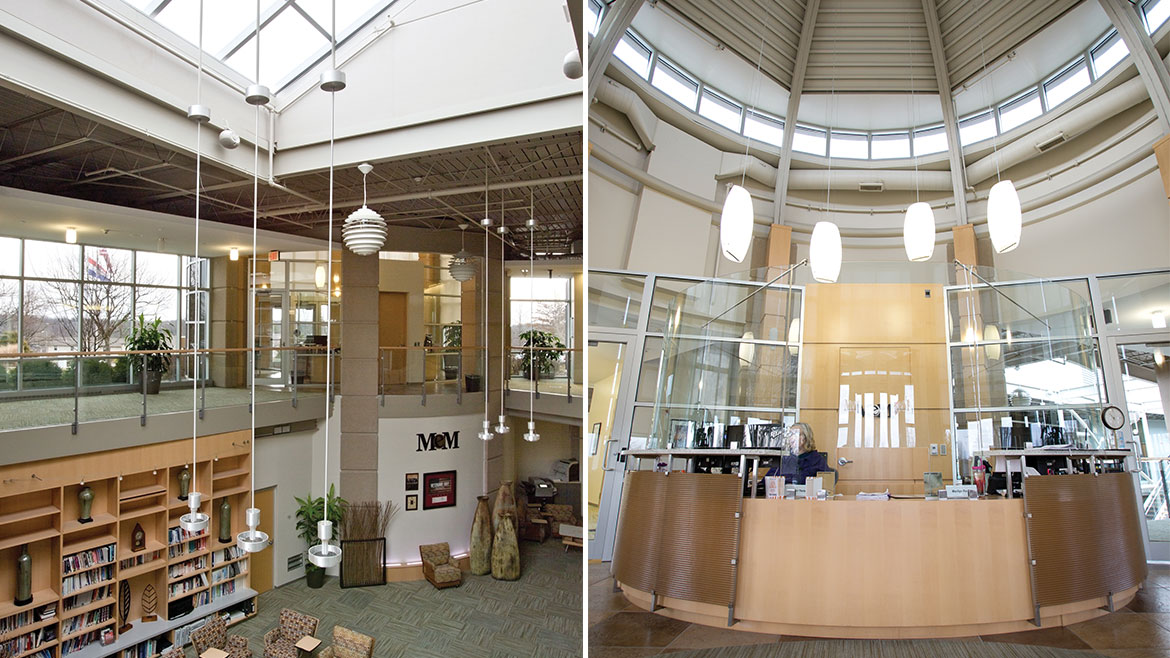 This employee-focused work culture seems to have helped MEM weather controversies that arose in 2011 surrounding then-CEO, former Gov. Roger Wilson and two MEM board members, followed by a damaging state audit. MEM ushered in a new era of leadership with Owen at the helm.
“MEM is not exempt from the tough situations that companies encounter,” says White about what happened six years ago. “What we focus on is picking ourselves up and making our company even stronger. We’ve done that recently by improving leadership and strengthening the focus on our vision of safe workplaces.”
As someone who’s been with the company from the start, Jackman says employee commitment to the work at hand has never floundered.
“One of the things I’m really proud about, in terms of this company,” Jackman says, “is that we have people who take a lot of pride and ownership in their work, and that’s been here as long as I’ve been here.”
MEM employees also seem to take a lot of pride in contributing to the community. In 2015, more than half of MEM’s employees volunteered a combined 1,600 hours, and corporate contributions, along with more than $50,000 in employee donations, benefited 128 charitable organizations around the state. MEM’s employee contribution matching program also helps charitable donations go farther.
While MEM makes taking care of its own folks a priority, at the end of the day, Jackman reiterates that their job is about bringing people home safely.
“We have a flag that we put at half-mast whenever a policyholder loses their life on the job,” says Jackman. “It’s a constant reminder to our employees that our mission is never over, and probably 20 weeks out of the year, that flag is at half-mast.”
The other weeks of the year, MEM celebrates keeping people safe and being a driving force in safety innovation. These victories are what drive every “safety fanatic” at MEM.
“We’re human beings,” Jackman says. “We get a lot of gratitude knowing we’ve helped people through trying times.”