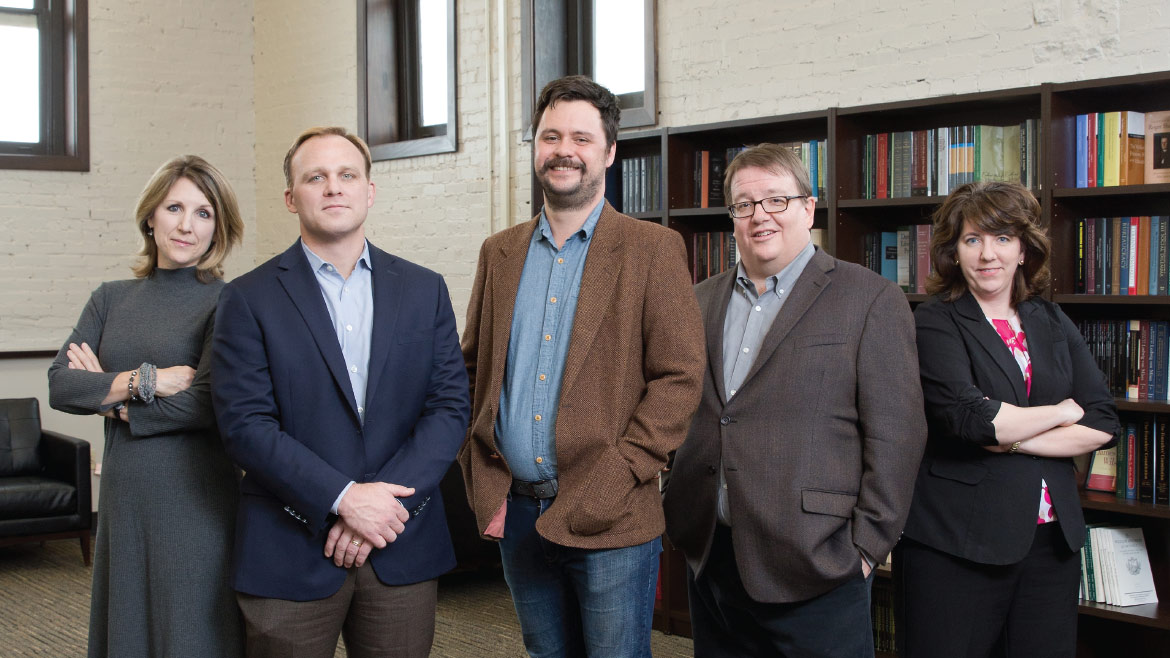 Public universities and politics are no strangers, but the two are particularly tied up today. Schools and legislatures across the country are dealing with tight budgets and rising tuition costs; campus protests — including those at MU — have become part of a national conversation about protected speech and constitutional rights.

MU’s Kinder Institute on Constitutional Democracy studies and teaches those constitutional rights, with a mission to make the abstract philosophies of early America accessible for 21st century students.

Established in 2014 with funding from the Kinder Foundation, a philanthropy started by MU alumnus Rich Kinder, the institute focuses on four constituent groups: undergraduate students; faculty and graduate students; public citizens; and a global scholarly community.

“The program itself is focused on American political thought and history, and takes a particular interest in the American founding,” says Justin Dyer, director of the Kinder Institute. Dyer says the institute is unique among similar centers at other universities because of the breadth of its programming and the caliber of its faculty.

Dyer’s early focus has been on these core strengths, which he hopes will carry the institute to its next goals: expanding the graduate program, hiring more highly qualified faculty, broadening the scope of community outreach, and establishing an international reputation.

In the last year, the Kinder Institute recruited established scholars, both from MU and from elsewhere, to their faculty.

“We want to build a scholarly reputation for both the institute and for the University of Missouri to be a place where people come to study constitutional democracy,” Dyer says. “When you hire great faculty members, they’re going to go out and publish, and their names will be on their books and articles.” Jay Sexton, Kinder Institute chair, and Adam Seagrave, associate professor of constitutional democracy, joined the institute in the fall.

Sexton returned to the Midwest after working at Oxford University in England. He says he was brought back by the unique opportunity at the Kinder Institute. “There are very few places in higher ed these days that both focus on political history and have the resources to make a difference,” he says.

Seagrave was excited at the prospect of working with the institute and with Dyer, whom he’d encountered in the academic world before. Seagrave says work by scholars and academics studying the American founding often goes unnoticed; the Kinder Institute, however, strives for public recognition and dialogue about its work.

“It’s great that we do so many things in the institute that help to spread awareness and understanding of American political principles that can hopefully have an impact on society and other academics, as well as other institutions around the country,” Seagrave says.

“Political history matters,” Sexton says. “If anyone didn’t buy that, or would object to that, the last six to eight months goes to show that our political institutions and systems are complex. They need to be understood, and they have all sorts of implications for everybody.”

Dyer says the political climate, both on campus and nationally, has helped spark interest in constitutional democracy among citizens. “Recent political events in the country have gotten people thinking and talking a lot about constitutionalism, the Bill of Rights and the government—a lot of topics that seem timely,” he says. “I think our students have been more interested in what we’re doing as a result.”

With the interest  there, the Kinder Institute will work to build its scholarly reputation. Seagrave, for one, founded and now edits an online journal exploring the meaning and significance of American principles called Starting Points. Its mission is to facilitate intelligent discussion without being overly academic — to provide “starting points” for informed political discourse.

One of the institute’s visions that Sexton is particularly invested in is expanding the graduate program. “That’s a way you really make an impact in this profession is both through the publications that everyone associated with the institution will produce, but also through being able to spread ourselves into other institutions by having successful Ph.D. candidates,” Sexton says. The institute will continue to offer educational opportunities for students, faculty, and the community, including hosting lectures and seminars.

Drawing from a diverse collection of individual interests and focuses, the Kinder Institute is a strong team. Seagrave says academia is often a solitary enterprise. “But here, it’s not — it’s communal,” he says. “Everyone is dedicated to a particular mission and a vision that we’re trying to follow in some way — a sense of a common purpose that we have here that you don’t really have in most other universities and academic units.”

Summer 2015
The forum sponsors the first group of Kinder Scholars, a group of 21 students who live together in Washington D.C. for 10 weeks while working and studying.

October 2015
The Kinder Institute receives a $25 million gift from the Kinder Foundation, the fourth largest endowment in MU’s history.

Winter 2015-2016
Following protests on MU’s campus, the Kinder Institute develops programming to engage and respond with students and faculty.

Fall 2017
The institute continues to search for established faculty members and adds student and community programming.