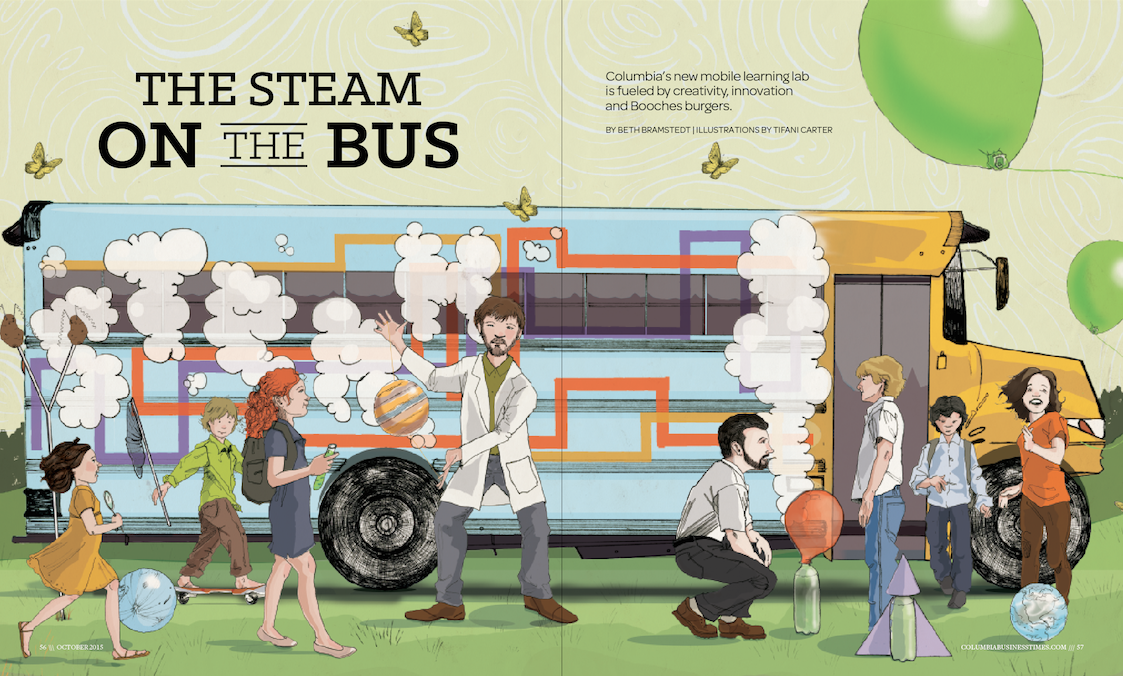 My curiosity was piqued from the very first email. Asked to write about a new “makerspace” for the kids of our community, I was introduced to school board member Jonathan Sessions.

“So this is even crazier,” Sessions wrote with enthusiasm. “It’s not just a space; it’s a bus!” He went on to describe the project as a mobile creativity lab designed to teach next-generation skills to the students of Columbia Public Schools. He suggests including Craig Adams, practical arts coordinator for the district, so we planned a time to meet.

What followed was an hour of pure entertainment over coffee at Kaldi’s. I can still feel my head spinning from the animated dialog that ensued. I say very little as Sessions and Adams, pumped full of caffeine and energized to talk about their new idea, tell story after story about the innovation of what’s affectionately being termed the STEAM bus.

I listen intently, along for the ride, as they laugh and joke about the role Booches burgers, snow days, Raspberry Pi and Hootie & the Blowfish had in their newest creative learning opportunity for kids.

As so the adventure began of putting into words the innovation behind a makerspace for Columbia students.

The brainstorming began one snow day last winter when Sessions and Adams were having lunch at Booches on Ninth Street. “Booches is where we solve a lot of the world’s problems,” Sessions admits with a grin, as he takes a deep breath and sinks back in his seat.

Most teachers and kids may have been huddled inside their warm homes or busy making angels in the powdery mixture, but Sessions and Adams were at work dreaming about a fun, hands-on bus that traveled around town giving local children the chance to make and create.

The pair got so excited that Sessions called to ask Linda Quinley, chief financial officer for the school district, to get them a bus. “Linda,” he quipped, “I’m at Booches, and I have another great idea.”

“Mr. Adams is always creative and thinking forward,” Quinley says. “He had mentioned the idea to me before, so I knew it wasn’t a whim when Mr. Sessions called.” Quinley thought the concept sounded like an enjoyable and affordable way to get new tools and experiences to a lot of students and was happy to do her part.

Once the superintendent mentioned the bus as a new idea, Quinley says she simply called Student Transportation of America to see if they would be willing to donate a used school bus. “They are a company committed to education and a new partner for us,” Quinley says. “It seemed like a sure bet, and it was.”

Hootie & the Blowfish: A workable model

“We are excited by the opportunity to partner with Columbia Public Schools,” says Kirk Wilkie, vice president of operations at Student Transportation of America. “The idea of supporting a mobile ‘lab’ seemed a natural fit for our company.”

Adams says it wasn’t the first time STA, through its nonprofit education foundation, had donated a bus for a similar cause. The first time came in 2011 in partnership with Carolina Studios, a media arts group in the foundation’s hometown of Charleston, South Carolina. Mark Bryan, lead guitarist and founding member of Hootie & the Blowfish, serves as chair of the studio’s board. The partnership was forged when Denis Gallagher, CEO of the bus company, met Bryan at a charity golf tournament and volunteered to support the studio’s cause by donating a bus.

The bus still acts as a mobile recording workshop and is equipped with iMac computers, a multitrack recording studio, sound booth, external PA system and stage. It visits 40 children each week, via free after-school programs, and targets schools with large populations of at-risk youth.

Columbia’s bus was delivered in July, all the way from New Jersey. “It came as a blank slate, a wide-open canvas,” Adams says with a grateful smile. The ‘canvas’ included a blown-out window and possible evidence of a raccoon’s nest, the men admit, but nothing a little TLC couldn’t fix.

According to Adams, STA not only donated the bus, but it also is gutting the inside, fixing the brakes and painting the nose. “When we get the keys,“ Adams says, “it will look like a brand-new bus.”

“Craig and I have taught science and engineering for a long time,” Doug Steinhoff says, “and the only down sides were the many fun and creative topics we couldn’t pursue because we were tied to a structured curriculum. We both agreed that if we had free reign of STEM-oriented content, we could really have a great time and invoke a lot of interest in the STEM arena.”

STEM stands for science, technology, engineering and math and serves as a core educational philosophy in Columbia Public Schools. 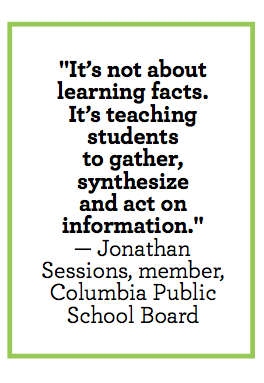 Add “art” to the STEM equation, however, and you get STEAM, a movement championed by the Rhode Island School of Design to put design and technology at the center of STEM as a way to drive innovation and ensure a prosperous future.

Steinhoff might have dreamed about a creative solution, but as far as the idea for a bus, he gives Adams all the credit.

“This bus will be a giant billboard for STEAM,” Adams says. “It will be a makerspace where students can apply previous classroom knowledge to something they want to create.” The plan is to coordinate through the media specialists at area elementary schools to bring the STEAM bus into the curriculum plan.

Columbia’s STEAM bus has been funded 100 percent by donations. When the bus debuts this fall, Sessions and Adams say, it will
be thanks to the grassroots efforts of businesses and colleges that have made in-kind donations, gifted money and supplies and offered physical labor to see the vision become a reality. In addition to the gift of the bus, the project has received three commitments of $5,000 to be paid over the next three years, a $5,000 contribution for bus improvements as well as a $15,000 grant from the Community Foundation of Central Missouri.

The crew designed, prototyped, tested and produced the hardware necessary for the project using 3-D printing and Raspberry Pi, an affordable, user-friendly, credit card-sized computer that allows students to explore computing and learn to program.

After developing the solution, the students spent a day onsite installing, configuring and testing their equipment. “It was a great example of what CPS students can do with the right tools,” Sessions says. “REDI ended up with a solid, easy-to-manage solution to their problem, and the students got firsthand experience solving problems and working with clients.”

And, Sessions admits, they were also happy to get out of school for the day.

The Raspberry Pi project illustrates just one way that more students in the Columbia Public School system will have access to new hands-on learning opportunities, tools and equipment through the STEAM bus.

Sessions and Adams hope to have the bus ready for Mizzou’s Homecoming Parade on Oct. 10. With their mental wheels turning, they describe the scene of 50 kids, all dressed up wearing blue lab coats, handing out information about the program to everyone they pass.

“Craig will be driving, of course,” Sessions adds enthusiastically.

And I’ll be among the crowd, anxious to experience firsthand just what a great idea, a little snow, some generous donors and a whole lot of passion can create.

For more information on the STEAM bus, or to donate to the cause, contact Craig Adams at [email protected].