July: Did You Know?

In downtown ColumbIa, it’s possible to purchase blue-collar overalls, a high-end road bike and to close on your new home by walking less than the length of a football field. The sidewalks are lined with big windows on the shops to display beautiful clothes on limbless mannequins or people happily eating delicious food.

Common sense might dictate that in order to operate a retail shop successfully in downtown Columbia, it would need to be located at street level. The seemingly endless stream of foot traffic provides a great advantage to street-level businesses, leaving the upstairs spaces populated almost entirely by either law firms and politicians or residents in apartments.

Although most retailers have found space along the downtown sidewalks, there are a few retailers who have found a good fit upstairs. They might not be easy to find, even if you know what you’re looking for.

But these places, such as Betz Jewelers, Melissa Williams Fine Art and Hitt Street Records, have become destinations for their customers.

“We have always been professional, and we feel more comfortable in a professional building,” says L.C. Betz, owner of Betz Jewelers. His store occupies most of the third floor of the executive Building, a space he says is bigger than most jewelers are able to operate in. Melissa Williams, owner of Melissa Williams Fine art, has found that foot traffic isn’t a driving force for her business, while Kyle Cook of Hitt Street Records notes that the vinyl-collecting community is what spreads his business.

All three owners touch on the impact of a personal connection and sense of community that drive their businesses. Cook notes that though he does have to compete with Internet sellers, many of his customers like to come spend time in his shop just to talk about and listen to music. Williams’ collections are unique works, and she says her customers respect the work she does to be able to present these pieces of art.

The elevator ride to the third floor of the executive Building is short. Located above Broadway, L.C. Betz has served as the jeweler to multiple generations of Columbians. Betz opened his store in July of 1983 after receiving his business degree from the University of Missouri but is the third generation of the Betz family to call himself a jeweler. Much like how his patrons might proudly pass along a piece of jewelry as an heirloom, it’s clear that Betz treasures the trade and passion his father passed along to him. “He was as good as they came,” Betz reflects on his father, Glenn Betz. “My father had a genuine heart for service, and that allowed us to be successful.”

Before starting his own shop in Columbia, Betz worked for his father for roughly 20 years in St. Louis. during that time he learned how to develop relationships with suppliers and manufacturers as well as his customers, many of whom had made the trip from Columbia to St. Louis to visit Betz Jewelers. “They would come visit us to have some work done, then go catch a game,” Betz says. “We were a destination for them.”

There is a very clean feel to the Betz Jewelers floor space. The overhead lights illuminate various rings, necklaces, watches and adornments. A woman is consulting one of Betz’s jewelers about a few older pieces she brought into the shop. “I couldn’t have built it to be what it is without the help I have,” Betz says. “People have bought into what we’re trying to provide here; they see the value in that.”

Betz says he consistently works with pieces his father made, which gives the store a unique sense of historical perspective as well as a sense of legacy. He understands the value and power that word of mouth can have on a reputation and that having a positive presence on social media is imperative to his business.

“Word of mouth goes a long way, and it travels very fast,” Betz says. “And social media, I see the benefit. It’s what we’ve always tried to do but on steroids.”

Another thing Betz has learned is the value of flexible business practices. With the advancement in 3-d printing over the past decade, Betz has seen the technologies and processes used to fashion the elements of jewelry evolve. as the technologies of jewelry have changed, Betz has embraced the change, saying he gets to “trust his talented employees” who are experts on these new technologies.

Betz has found a fit for his business overlook- ing the intersection of Sixth and Broadway. “I’m in a place I love to be and have always loved to be,” he says with a grin. “Serving customers is what’s going to make you successful. It makes you feel worthwhile.”

Melissa Williams, whose shop has been located above the east sidewalk of Ninth Street for more than 20 years, has openly embraced the blurred lines between art and her business. On the wall are vibrantly colored oil paintings. Lying on a table is a stack of original charcoal-and-ink vignettes. In between the two is a 4-foot-tall globe from the first half of the 20th century. “It’s truly interactive,” she says of the process of visiting the shop and leaving with a piece of art. “Two humans interact and have to find a synergistic moment.”

The entrance to the studio is easy to miss. With no exterior signage (a sign stating whether the studio is open or closed sits just inside the glass door entrance), the entrance to the studio blends into the brick wall. Having been in business since 1973, Williams moved to her current location in the early 1980s. “actually, from another second-story location,” she adds. “I’m not as dependent on a constant flow of foot traffic as some other shops.”

The upstairs studio location offers her regular customers the convenience of close proximity to the downtown shops and restaurants while still being able to show her art in an environment conducive to her needs.

“Antique stores tend to work better with low traffic,” Williams says, as patrons are able to take more time to experience the art. Many of her clients are regulars, but she does enjoy when young people who are interested in art and antiques come in the shop. “All the young people I see are really interested. I love to talk to the students who are interested. It’s fun, and they buy stuff! We’ve got this tremendous mix of different economic brackets and age brackets, and it’s working like crazy downtown.”

Williams is concerned that this diversity may start to diminish, however. “Everybody loves the energy,” she says. “My people like to come down [to the studio] and go to lunch. If they started to feel like they’re going to the mall, they won’t come down here and go to lunch, and that will affect my business.”

In addition to connecting with her customers, Williams enjoys connecting with the pieces she offers. An estate she was able to purchase last year made up of various vignettes and sketches was well received by her customers, she says, and “was an amazing thing. He was trying to actively create a vehicle of communication. and everybody felt it.”

Williams speaks passionately and clearly about her shop and its future. She has reason to, as her business is one built around the relationships between her, her clients and the art in her studio. The people who climb the stairs into her shop are looking for something, and she takes great pride in being able to introduce them to a piece of art they would be unable to get anywhere else.

“People like to make my shop a destination,” Williams says. 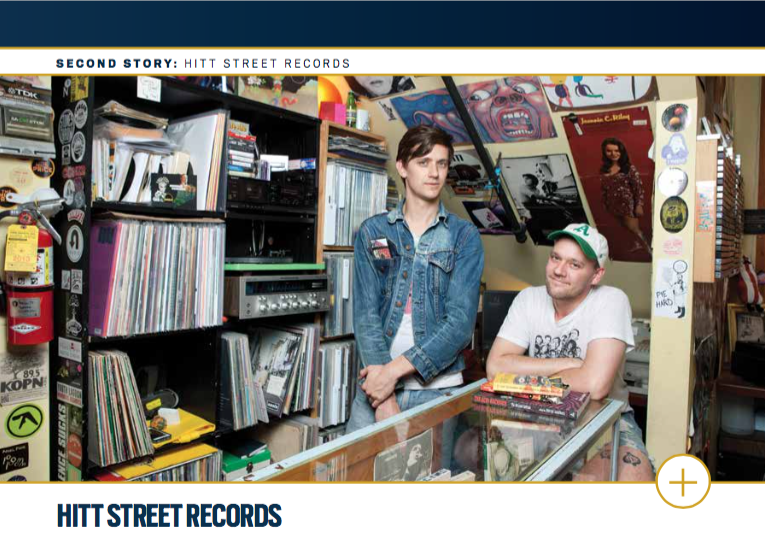 It’s hard to find Hitt Street Records. This isn’t intentional, but as the store has grown from an idea formed during a late night in the Ragtag Cinema downstairs to a shop with a shingle hanging out front, it is something Kyle Cook has embraced.

“The mystique helps,” he says when asked about their unique location. “A lot of people look at the cinema and ask, ‘Where could a record shop be?’”

Since opening its doors in the fall of 2012, Hitt Records has experienced organic growth. “We took it month by month,” Cook says. “The first month we set a goal to build racks for our records, then we had a goal to have a professional sound system, then a sign, then a website.”

The stairs leading from the video store, which is still named 9th Street Video, despite being located on Hitt Street, are lined with various posters promoting records, bands and performances. The shop itself barely seems like it could handle an influx of inventory, its racks and shelves filled to an overwhelming amount.

Some of this stock has come from Kyle Cook’s personal collection, which still includes “around 3,000 records.”

“It’s a process, and it’s nice,” Cooks says of the act of shopping for vinyl. “Streaming is over- whelming. You see young people ditching their devices to come listen to vinyl in the shop. People like to get out of their house. They say, ‘Let’s go downtown, walk around and check out the record shop.’ And that’s a necessary part of any community, people coming out and interacting with their environment.”

The search for a space for the record store was a unique one. Downtown Columbia used to have a number of record stores, but they had all come and gone for various reasons (another record store has since opened on 10th Street just north of Broadway).

“You had to go to antique malls or Jefferson City for records,” Cook says. “Even Sedalia had a record store. We didn’t even consider opening it in the cinema building.”

Eventually, the owner of the video store suggested they take a look at the space above 9th Street Video. It was being used as a storage space for VHS tapes and seemed perfect for the communal effort it took to make the late-night idea a daylight reality.

“Initially it was just a lot of people coming together,” Cook says. “None of the people who put this together are marketing people. They’re just a bunch of weirdos.”

Initially the store was only open 24 hours a week and didn’t have a sign out front. Now Hitt Records has members of the vinyl community making it a destination.

“It’s a niche,” Cook says of his customer base. “People were showing up from Rolla; from Omaha, Nebraska; and from Lawrence, Kansas.” The store has also had an impact on the down- town Columbia community. He says by attracting both old record hounds and curious high schoolers, Hitt Street Records has found its place above the downtown Columbia sidewalks.

“It’s been such a community-building exercise for me,” Cook says. “There’s such a deep connection on so many levels.”