THE NUMBERS for the Columbia area’s burgeoning medical industry are ever changing and sometimes difficult to quantify. There are questions such as the number of practicing physicians, assistants, technicians, lab personnel, office and support staff as well as the number of outside entities connecting with the medical community. More questions: What are the number and specialty of various physical facilities, hospitals, specialized clinics and labs? What’s the total square footage devoted to medicine and the allied arts, the total number of hospital beds and a census of special diagnostic tools such as CAT scanners and NMR devices?

There are financial questions about receipts and expenditures, profits and losses, cash flows, total cost for payroll and benefits, insurance costs and reimbursements, supply and equipment expenditures, taxes paid (if a particular entity is not exempt) as well as benefits accruing to a universe of other entities such as the hospitality industry. In the end, wouldn’t we be pleased to have a rough estimate of the total gross domestic product represented by our medical industry and its percentage of the Columbia metro area’s overall GDP?

Then there are numbers more elusive and fascinating of which little can be disclosed because medical privacy laws have stiffened. What is the geographic service area of the Columbia medical community? The Bureau of the Census, geographers, demographers, economists, other researchers and ordinary media practitioners have long grappled with defining what constitutes the Greater Columbia market and its area of influence.

Newspapers initially developed trading zones based on sales and circulation penetration; later radio and television stations broadened most retail trade areas based on their greater overall coverage. Newspapers and magazines are audited to produce verifiable circulation and readership figures. For radio and TV’s more arcane process of transmission and reception, coverage is determined by technical criteria such as power and transmission tower height; viewing and listening numbers are derived from less precise audience surveys conducted periodically. Circles representing radio and television station coverage extending dozens of miles from Columbia find a not so surprising soul mate in the actual coverage areas served by Columbia’s medical community. 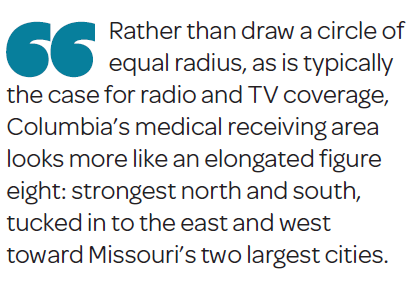 Although not in the business of sending, which is the forte of the media, Columbia’s medical community members have become significant entities for reception. Sitting around office waiting rooms, one may hear an otherwise unidentified patient say they’re from such and such place and that they drove a considerable distance to get here. Typically it’s about specialists and specialized services unavailable back home. One hears of patients from northern Arkansas, southern Iowa and western Illinois. Other patients on the fringes of the Kansas City and St. Louis metropolitan areas visit our facilities to avoid hassling with the big cities.

Rather than draw a circle of equal radius, as is typically the case for radio and TV coverage, Columbia’s medical receiving area looks more like an elongated figure eight: strongest north and south, tucked in to the east and west toward Missouri’s two largest cities.

An eye toward an aging population

Although somewhat inured to its significance because we live here, our consciousness of the extent of Columbia’s medical receiving area remains underappreciated. Columbia’s highly concentrated, virtually unlimited range of physicians, specialized institutions and the services they offer will only consolidate and advance our dominance outstate in the health care field.

With an eye toward major demographic shifts that have already begun as the post-World War II baby boom bubble moves toward maturity comes a potentially huge development opportunity of a different sort — the housing and care of this segment of the population as it ages. Developments will keep the following in mind: reduced mobility, specially tailored layout and design, recreation opportunities, access to mass transit and other services. As the current student-housing boom matures and perhaps begins to fade, developers and the investment community will be called upon to meet a housing challenge of a different sort for these soon-to-explode legions of older adults. Then there’ll be even more statistics for us to track.