Briefly in The News for September 2012 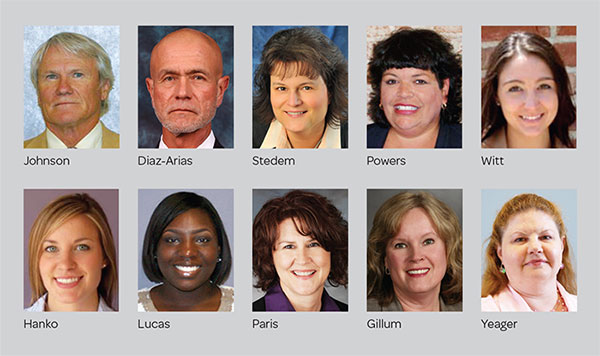 After completing medical school and residency at the University of Missouri, Dr. Diaz-Arias joined Boyce and Bynum Pathology Labs in July. Diaz-Arias is board certified in anatomic and clinical pathology with special interest in gastrointestinal pathology.

Stedem has been hired as the administrative services director for OATS Inc. Stedem formerly served as a public information officer for the City of Columbia. She graduated from Columbia College with a Bachelor of Science in business administration. Stedem will assume supervisory duties assisting the executive director with daily operations of the organization.

Woodruff Sweitzer has hired Powers as senior traffic manager. Powers brings more than 25 years of experience to the agency in her role as traffic manager at numerous Midwest broadcast outlets. Most recently, Powers was at Grey Healthcare Group in Kansas City where she developed the trafficking policies and procedures at the agency.

Witt has joined the Woodruff Sweitzer team as a copywriter. A graduate of MU, Witt brings national brand experience including State Farm, Capital One and Sierra Mist Natural. Previously at DDB Chicago, Witt was an art director/copywriter and prior to joining DDB Chicago was art director at SPM Advertising.

A recent graduate of MU, Hanko has joined the Woodruff Sweitzer team as account coordinator. Hanko has built her young career with strong internships in the political and financial industries and was an account manager at YAYA Connection, a student-staffed agency that specializes in providing clients with insights into the youth and young adult market.

The City of Columbia Public Works Department announced the hiring of Sapp as the department’s public information specialist. Sapp formerly filled the role as public information officer for the Columbia Fire Department before his retirement at the end of June. His new duties include media relations, department press releases, assisting with marketing for Public Works divisions and handling open records requests.

The board of directors of The Callaway Bank recently promoted Paris to assistant vice president. Paris, who joined the bank in 2009, serves as the branch sales manager at the Forum and Chapel Hill location. “Carolyn’s ongoing commitment to involvement within our community proves to be beneficial to everyone,” says Gary Meyerpeter, president of the Boone County markets.

Boone County National Bank promoted Hecht to senior customer service representative for the Customer Service Center, where she will assist various customers with account maintenance via telephone and online chat.

Boone County National Bank promoted Stahlhuth and Hunt to teller II. Employees are hired as a teller I, and then, once they’ve completed their training and have had six months of successful experience, they are promoted to teller II.

A Time to Be Heard