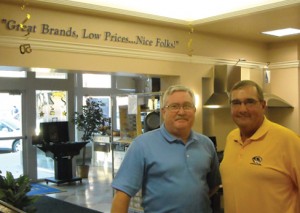 With best friends, business partners and in-laws serving as its management team, Downtown Appliance is truly a family-owned business. For 50 years the store has served as Columbia’s downtown appliance store.

Herb and Wilma Lou Helmreich opened the store in 1961 in the former Central Dairy building. “Frigidaire wanted a dealer downtown, so they talked [Herb] into opening his own store,” says Donnie Helmreich, son of Herb and Wilma Lou and co-owner of Downtown Appliance.

Co-owner John Graves came to the business through friendship. “Donnie grew up in the business and started working here after school when he was 13. He and I were best friends in school, and I started working after school as well,” he says “Both of us have been working here for about 40 years.” In March 1981, Graves introduced Helmreich to his sister Carla, and the two were married in September 1981. Soon she began working at the store as well.

The three began managing the business in 1987, and in 1992 they purchased the business from Herb and Wilma Lou when the couple retired. John, Donnie and Carla managed the business together until January 2010, when Carla died. Her mind for business and dedication to the company greatly aided in the success of the business, says Helmreich.

When Downtown Appliance began, independent appliance dealers offered technical service along with the sale. “Everyone had their own service technicians when we started out,” Graves says. “Generally, you started out with a brand that another independent [dealer] didn’t have.” That was what made each appliance store unique.

Another difference is that dealers sold a lot of other products besides just large appliances. “Back then, small appliances were an integral part of the business — and we’re talking about TVs and stereos, toothbrushes and vacuum cleaners,” Graves says. “Anything that was electric, that’s what appliance stores sold.” With the opening of big box stores, the independent stores couldn’t compete with the prices.
“Everyone just strengthened and competed in the major appliance business,” Graves says. “That’s what you became, a major appliance retailer –meaning kitchen appliances and laundry.”

With the opening of big box stores, service is how Downtown Appliance differentiated itself. It became more of the expert of the major appliances, and it had people who could fix them if something went wrong. “The big box stores tried to come in and offer a mass supply, but they didn’t offer the service,” Helmreich says.

As for reaching a 50-year milestone, Graves says, “I’m proud of our ability to survive everything that was thrown at us. We weren’t afraid to work hard.” Helmreich adds: “Being in business this long, you meet a lot of people and make a lot of friends. You’ve earned their trust, and that means everything.”