People You Should Know | Katherine Stull

The Columbia Center for Urban Agriculture is leveraging its expertise to expand its operating revenue sources from grants, donations and produce sales to consulting and contract labor. The nonprofit’s plan is to attract enough paying customers to become a self-supporting organization while tending its mission — making farmers out of city folk.


As he watches compost slide off a truck bed at the corner lot next to Kilgore’s, Daniel Soetaert talks about the strategy for improving the community garden tended by neighborhood preschool students and pharmacy-recruited volunteers.
With the expertise and oversight of the Columbia Center for Urban Agriculture, they can transform last year’s somewhat haphazard garden into a green oasis that will look better and produce more for the Nora Stewart Early Learning Center.
Ann Bromstedt, a co-owner of Kilgore’s, said one of Soetaert’s first recommendations was to run the crop rows from east to west rather than north to south like they did last year so the plants get more sun exposure.
“That’s knowledge I don’t have,” Bromstedt said.
Soetaert also suggested the Kilgore’s volunteers grow vegetables that kids want to eat. “Kids love peas,” he said, and cherry tomatoes. Both plants are now in the garden’s master plan designed by the CCUA. As CCUA’s education coordinator, he’ll also teach the Kilgore’s staff how to make the volunteer experience more fun for those who show up to work.
Yet, the Kilgore’s project is also a step toward making Soetaert’s organization more productive financially so it can eventually be self-supporting.
The CCUA was founded in 2008 as a nonprofit dedicated to helping people learn how to grow food on urban plots in a sustainable way
Soetaert said the CCUA cannot live forever on grants and donations, especially given that its 1.3-acre farm on Smith Street is expected to demonstrate how urban agriculture can be economically viable. 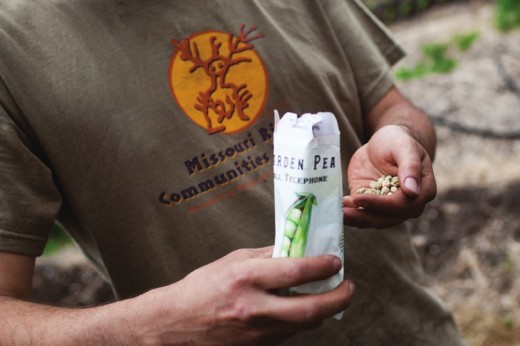 But Soetaert acknowledged the farm and the CCUA’s other operations depend on having the right partnerships — and that means donations.
One example is Mark Stevenson, who owns and manages rental properties and is letting gardeners freely use several of his vacant lots for community gardens, including the one next to Kilgore’s.
Other partnerships include Socket; U.S. Rents It; the University of Missouri; the city of Columbia, which provides compost; and the Stephens College Equine Center, which provides manure and straw used as fertilizer. Other partners include Slow Food Katy Trail, Walk About Acres, the Community Garden Coalition, Sustain Mizzou and the MU Sustainability Office.
Just as important are the partners who buy their produce; chief among them are Sycamore and Red & Moe, two downtown restaurants.
“Partnerships also come from many individuals throughout the city who have contributed in a thousand different ways,” Soetaert said.
The agronomist is learning how to help the CCUA stand on its own financial feet.
“We have cash-flow meetings all the time,” said Soetaert with a rueful smile. “I’ve become a businessman.”
Founded by Soetaert, Bobby Johnson and Adams Saunders, the CCUA operates with a board of directors, headed by Saunders, the president.
In 2010 the CCUA began selling the produce grown at the Smith Street farm and vended some 4,000 pounds of vegetables and fruits and another 300 pounds of chicken. But according to its annual report, that only brought in $4,210. To be fair, the CCUA only started working on the farm last spring, so production should increase this year.
But the CCUA isn’t putting all its “eggs” into one basket.
Backyard bucks
In 2010, the center kicked off a new project called Backyard Gardens/Edible Landscaping. In this money-making project, the center provides services such as landscape designs, oversight of projects and planning or oversight for organizations such as Kilgore’s.
CCUA’s new landscaping-for-pay plan does not mean the CCUA is turning its back on its nonprofit mission. A portion of the money made from its landscaping services will be funneled back into its Opportunity Gardens, which provide free garden help for low-income families and schools. Some funds will also go toward other needs of the organization.
But the new landscaping venture has helped the CCUA start paying some of its employees. This is the first time Soetaert has drawn a salary, budgeted for $10,000 for 2011, according to the annual report. “Most of our money has come from produce sales, landscaping and donations,” Soetaert said.
Yet, there are dangers in CCUA’s new landscape-for-cash move. Some of the funds are from grants, which once again could mean the income could end. “Our Healthy Habits project with the CDC, PedNet and CHA (Columbia Housing Authority) is grant money,” Soetaert said.
For example, though Kilgore’s is allocating some of its advertising budget to the garden project, CCUA’s fees are partially funded by a grant received by the daycare center.
A grant is also partially funding the work the CCUA is doing for the new community garden soon to be planted at the Columbia/Boone County Department of Health and Human Services location on Worley Street.
“The Kilgore’s community garden is a good story, and there should be more good stories like Kilgore’s,” Soetaert said.
But until there are, CCUA’s goals are to increase production and marketing of its farm produce, increase the landscaping business and continue to seek other funding. The organization will also continue to expand its education offerings from preschool tours to workshops to college internships, Soetaert said.
Although Soetaert said he’s become a businessman, he added that the CCUA doesn’t want to lose its focus on serving the community.
“It’s a nonprofit run like a business,” he said. “We want to provide good service and goods to people while staying committed to the community. … We want to grow but not grow too fast.”
CCU At A Glance | www.columbiaurbanag.org
Office and Staff Residence
214 Saint Joseph St.
You can attend CCUA workshops on everything from raising chickens to preserving produce at this house, which is owned by CCUA Board President Adam Saunders. This historic home houses the CCUA’s office and provides housing for some of the CCUA’s staff. The front yard provides a demonstration site for edible landscaping in terms of herbs. Adjacent to the house is a community garden, where community members grow their own food.
Demonstration Garden
1211 E. Ash St.
This is where you can see sustainable urban agriculture in practice. From irises to onions to chickens clucking as they lay their eggs, you get a look at what might work for you at your urban landscape. There are also self-guided tours. On May 28, the CCUA will hold a workshop on what to plant in your garden.
Urban Farm
1209 E. Smith St.
You can buy fresh produce here on Monday, Wednesday and Friday afternoons once the market opens later this spring. Volunteers work at the farm from 3:30 p.m. to dusk on Mondays, Wednesdays and Fridays. A chicken-processing workshop will be held here in June and July.