The historic building on North 10th Street downtown, where people once pumped iron at Gold’s Gym and then Key Largo, will soon become the site of a remarkably different workout.


Atkins Investments is renovating the ca. 1907 building and plans to finish the “couple of million dollar project” by 2012, Scott Atkins said. Demolition work inside the three-story building is underway, as is the search for tenants.
“We really think the second and third floors would make great office spaces,” Atkins said, noting the building could provide 3,000-square-foot to 5,500-square-foot spaces. They’ve already received several inquiries, he said.
Huge windows will once again grace the fronts of all three levels, which, when combined with the tall ceilings, will give the building great natural light, Atkins said. “It lends itself to loft office spaces and loft apartments.”
The final mix of office space or apartments will be driven by tenants’ needs and what best suits the building, he said.
Deb Sheals, the historic preservation consultant on the project, called the red-brick structure a diamond in the rough. The building is one of the taller historic buildings downtown and a link to one of Columbia’s oldest businesses, the Parker Funeral Home.
The building began life as the Parker Furniture Store, which moved there from 700 E. Broadway. At the time, it was common for furniture stores to double as casket makers, Sheals said. “Furniture companies quite often became undertakers.” 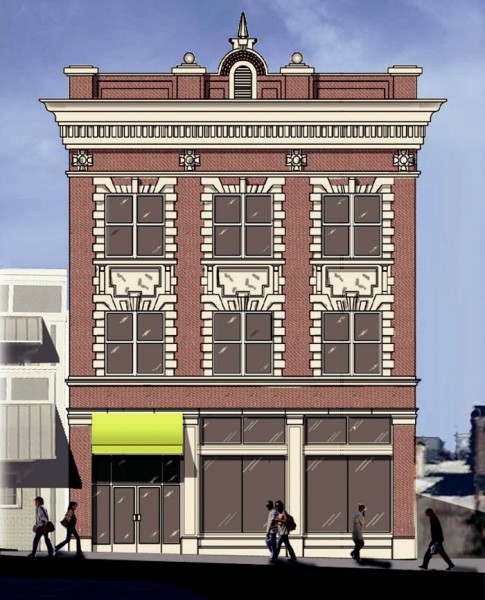 Eventually, the company phased out the furniture portion of its business and moved next door as Parker Funeral Home, where it remains. In 1954, the building was occupied by McLaughlin Furniture Store. Then in 1971, it was remodeled to house the Harzfeld Clothing Store. Key Largo Fitness and Tanning bought Gold’s Gym in 2007 and moved out of the building in December 2008, according to Michelle Wagner of Key Largo.
Sheals said the renovation will remove the 1971-era marble slabs from the front and replace the inappropriate windows with historic, energy-efficient windows.
Sheals pointed out that the Atkins firm, a partnership of Scott and his father, Tom, led the movement to renovate historic downtown buildings, starting with what’s now called the Atkins Centre on Ninth Street just south of Cherry Street.
“They showed that historic preservation could be good business,” Sheals said.
John Ott had already renovated the building that now houses My Secret Garden, but the Atkins’ Ninth Street project, Sheals said, demonstrated the usefulness of Missouri’s historic tax credits, which give investors 25 percent back on approved costs of renovating qualifying buildings. These incentives are helpful but, Sheals said, “far, far from a handout, sometimes painfully so.” In fact, she noted, historic renovations can prove more expensive than building from scratch.
So why do the Atkins do such projects? Two reasons: history and economics.
Scott Atkins noted his family has been in Columbia since the mid-1800s. In an earlier interview, his father, Tom, said the renovations make long-term sense. The Atkins have renovated four other buildings, including the Hamilton-Brown Shoe Factory at 1123 Wilkes Blvd., the former Strollway Center on 111 S. Ninth, the Miller Shoe Building at 800 E. Broadway and the Matthews Building at 804 E. Broadway.
The economic benefit stems from the fact that the renovations can yield higher occupancy rates.
For example, prior to the Strollway’s renovation, occupancy rate was 50 percent. Now it’s 100 percent, Tom Atkins said. The Hamilton-Brown building went from being half empty to being fully occupied.
But the main reason, Scott Atkins said, is that historic renovations feel good. Sometimes he and his father get to reclaim somewhat unknown history.
At one time, wooden propellers and recreation equipment were made in the Hamilton-Brown, and now they have some of the propellers and even a few sport items made there on display in the building.
During the renovation of the Hamilton-Brown building, they also found some remnants of its former life as a shoe factory, including some old shoe soles.
So far, no such findings have turned up at the 10th Street location.
Dianna O’Brien is a freelance journalist who blogs about Columbia’s historic places at columbiahistoricplaces.com