Hank Foley, the Man with the Plan 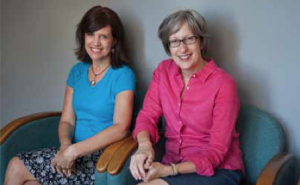 When EnCircle Technologies founders Becky Llorens and Teri Walden first met on a Facebook group for parents of children with autism, they had no idea how much they had in common.

They lived on the same street in Columbia. They both enjoyed gardening. They both cared deeply for their sons and worried about their futures. And as Llorens, a physician, and Walden, a secondary education teacher, became fast friends, they realized they shared a vision: to help prepare people with autism for independent adult living.

Their brainchild, EnCircle Technologies, is a nonprofit startup that works to provide technological training to young adults who fall on the autism spectrum. It began last fall in Llorens’ basement before moving to its current space on the fourth floor of Missouri United Methodist Church, where it offers courses in HTML programming, Linux, professional development and WordPress design.

“Becky and Teri are two phenomenal women,” says Collin Bunch, a counselor for the Small Business Technology Development Center. Bunch worked closely with Llorens and Walden after the pair approached SBTDC partner organization Regional Economic Development Inc. to help them establish a nonprofit business model. “They’re smart, and they know what they want, but they are also open to suggestions and take direction very well. A large part of my job is honestly just finding opportunities for publicity, then convincing them to be a little bold and take them.”

Individuals with autism spectrum disorders frequently demonstrate an increased ability to focus intently on certain tasks, especially those that involve numbers or technical skills, for long periods of time. Walden, Llorens and Bunch, noticing the number of Columbia businesses seeking employees with tech skills, established EnCircle with the goal of marrying these two communities and placing autistic workers in need of stable employment with firms in need of highly skilled and focused employees.

Medical professionals categorize autism as a spectrum disorder, meaning it encompasses a number of individually recognized conditions such as Asperger’s syndrome and childhood disintegrative disorder. These conditions all share common diagnostic traits including delayed social development, communication difficulties and a tendency to fixate on repetitive tasks, but different individuals can manifest a wide range of related behaviors and experience their symptoms at varying levels of intensity.

So how does Encircle Technologies help a variety of students?

According to Walden, their strategy is to treat every one of their students as a unique case. Their small class sizes allow them and their instructors to work one on one with each student and make adjustments to the coursework or environment as needed.

“It’s like anything in education,” Walden says. “Different students have different needs. If one of our students is especially sensitive to loud noises or touch or lighting, we do our best to make sure they have a comfortable environment in which to work.”

Some individuals on the autism spectrum are able to function within traditional parameters of employment and education, but many others find themselves shut out of systems that do not accommodate for their differences. In 2009, the U.S. Department of Education’s National Longitudinal Transitional Study found that only 33 percent of adults with autism were employed; of that number, nearly half worked less than 20 hours a week. Many find themselves relying on government assistance or support from family members.

“We want to give our students tools they can use to earn money, to rent houses or apartments and to live independently,” Walden says.

EnCircle is not alone in recognizing the potential for adults with autism to become skilled tech workers. Texan entrepreneur Dan Selec founded the Plano-based nonPareil Institute, which provides computer classes and training for autistic individuals, in 2009 after noticing his son’s aptitude for computing. German software giant SAP announced last year that it plans to actively recruit programmers with autism over the course of the next six years. SAP’s goal by 2020 is to have a workforce that is 1 percent autistic.

But Llorens and Walden can attest that this was not always the case. When Llorens’ son first began to display signs of autism, she found few resources in her community to help her deal with the ongoing journey of raising him — and even fewer suggesting that he had a bright future.

“I had a few brochures, but I wasn’t sure that they applied to my son,” she says. “We were alone, and that was a struggle until more resources started to appear years later. In the meantime, you rely upon school personnel, the Internet and the few people or books that you run into by coincidence.”

“There are so many families still searching,” Walden adds, “for answers, for opportunities and for understanding.”

The founders and staff of EnCircle hope to expand their efforts in the future by extending help, guidance and possibilities to people and families affected by autism in the Midwest. On July 15, they began using the crowd-funding website IndieGogo to fundraise for additional programs and services.

“EnCircle is really wanting to stand in the place of something that’s needed in our community that isn’t currently there,” Walden says. “We have a local economic need for skilled technology workers, and we have our need, as families and loved ones, to help our children fulfill their potential. We think it’s a good match.”

What If…? MU plans to spark campus curiosity