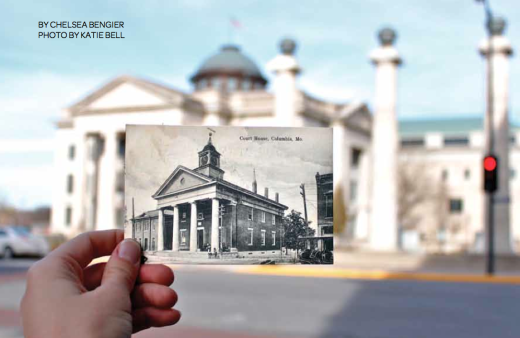 Built in 1828, Boone County Courthouse underwent three renovations to get to where it is today. The original two-story, brick courthouse lasted less than 20 years due to its terrible condition.

In 1845, the court appointed William Jewell as the commissioner for the second courthouse. Using $15,000 the court had appropriated, architect W.M. Winter completed the courthouse in 1847.

The improved Boone County Courthouse, as seen in the aged picture above, held the most historical significance. When it was built, the courthouse columns were aligned with those of the Academic Hall at MU.

This courthouse was used throughout the 19th century, until the third and final courthouse, which still stands today, was completed in 1909. When the County Court ordered the demolition of the old building, a public outcry saved its columns, much like it did when the Academic Hall burned down in 1892.

The court commissioned John H. Felt to draw plans for the new structure. He decided to incorporate a lower, rounded dome to highlight the classical design. The courthouse was also moved to the corner of the square in order to showcase the preserved columns.

Today, the columns of the 1847 courthouse and the Academic Hall still stand as a historic marker known as the “Avenue of the Columns,” located on Eighth Street.