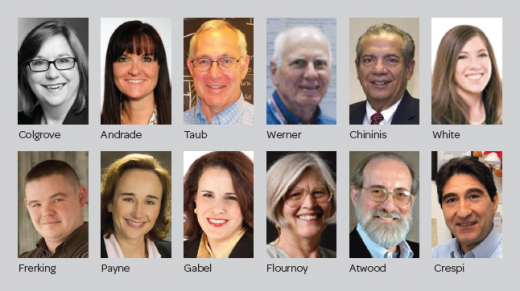 Veterans United Home Loans recently hired local television reporter Sarah Hill as its chief storyteller. “We realized we had great stories to tell, and we needed to do a better job of capturing them for our audience,” says Kris Farmer, VU’s chief marketing officer. “The logical choice was Sarah.”

Boone County National Bank promoted Kyle Gillespy to financial associate II at the University of Missouri Hospital Bank, where he will work closely with customers to accomplish their banking needs, including handling deposits and mortgage loan applications.

Billy Borgmeyer was recently promoted to consumer banking representative with Boone County National Bank.  In this position, he will float around to the 17 branches in the area and help customers with the management of their accounts.

Dean Chininis rejoined the staff of The Lodge of Four Seasons in Lake Ozark, Mo., after being appointed has been appointed General Manager, Vice President of Operations.  This is his second time as General Manager at The Lodge.  Chininis has previously held management positions with The InterContinential and the Marriott Country Club Plaza in Kansas City, Mo., The Chase Park Plaza in St. Louis, The Arizona Biltmore in Phoenix and The Ritz-Carlton in Buckhead, Ga.

Amanda Andrade will serve on Vetrans United Home Loans’ executive team as chief people officer, a position that works to benefit the company’s workplace environment and human resources tasks across the nation.  She is a PhD. student at MU and is working on her “Highly Profitable, Employee-Centric Work Environments” dissertation.

The Neutron Scattering Society of America elected MU professors Haskell Taub and Samuel Werner (emeritus) to the prestigious Fellows program for their outstanding research and contributions to the neutron community.  Annually, only one-half of one percent of Society’s members attains this recognition.

The mortgage lending department of Boone County National Bank recently named Ann Colgrove as its vice president.  Colgrove, who graduated from MU with a bachelor’s degree in political science and has 20 years of experience in the financial realm, is responsible for initiating mortgage loans and strengthening connections with local realtors.

Amandi Swartz was appointed club president for Rotaract of Columbia after two years of membership.  Swartz works as a rehab social worker at The Neighborhoods by Tiger Place.

After one year of serving on the board, Kari Salmon, the development director at Coyote Hill Christian Children’s Home, will serve as Rotaract of Columbia’s club president-elect.  She has been with the club since July 2011.

Rotaract of Columbia’s new treasurer for the 2012-2013 fiscal year is Teresa White, a marketing consultant at the Business Times Company.  White has been with the club since May 2011.

Rachel Ellersieck will serve as Rotaract of Columbia’s club secretary.  Ellersieck is the communications coordinator at The Food Bank, and 2012-2013 marks her first year on Rotaract’s board.

Seth Frerking and Denise Payne at Century 21 Advantage exceeded expectations in regards to their mid-year sales goals, and were subsequently honored with national Gold Pacesetter Awards for their exceptional Jan.-June 2012 records.

The Columbia, Mo. branch of Century 21 Advantage was awarded the Platinum Pacesetter Award for Outstanding Sales Achievement and Performance for the Jan.-June 2012 period.  The Pacesetter award recognizes Century 21 offices, agents and teams nationwide for surpassing their mid-year goals in terms of monetary sales or units sold.

A recent Wall Street Journal blog post highlighting the importance of female deans of business schools featured the successes of Joan Gabel in her position as Dean of MU’s Robert J. Trulaske, Sr. College of Business since 2010.  “Her tenacity, dedication and creativity have proven her a great leader and she continues to cultivate and develop new talent, innovative programs and — most important — successful students,” said Allen Bluedorn, Associate Dean for Graduate Studies and Research.

The Lodge of Four Seasons

Readers of AAA’s Midwest Traveler magazine voted in the annual “Best of the Midwest” contest and awarded The Lodge of Four Seasons in Lake Ozark, Mo. the titles of 2012 Best Large Hotel, Best Spa Destination and second-place for Best Fine Dining.  Readers could cast their votes for their favorite large and small vacation cities, best day tour, best brunch and more.

The title of one of five “Best Public Golf Courses in Missouri 2012” – according to GOLF Magazine’s annual review – goes to The Ridge at The Lodge of Four Seasons in Lake Ozark, Mo.  Four Seasons also offers another public course called The Cove and a private course designed by Jack Nicklaus called The Club at Porto Cima.

Nancy Flournoy, professor of statistics at MU, will be awarded the 11th annual Janet L. Norwood Award, an honor that recognizes achievements of women in the statistical sciences.  The award is sponsored by The School of Public Health at the University of Alabama.

The Royal Society of Chemistry awarded the Supramolecular Chemistry Award to Jerry Atwood, the Curators’ Professor and Chair of chemistry at MU, for his innovative work with supramolecular complexes and intermolecular non-covalent interactions.

Eduardo Crespi is one of 10 finalists competing to win $10,000 from the Ameren Missouri Powers Change grant program.  Crespi represents Centro Latino de Salud, a charity that suggests health care providers for local families, provides translation services and promotes health literacy.  As a finalist, he has already received $250 for the charity.

Are you or your employees making waves in the Columbia business community?  We want to hear about it.  Send us your news to [email protected]